Winner of the William J. Goode Award from the American Sociological Association

Millie Acevedo bore her first child before the age of 16 and dropped out of high school to care for her newborn. Now 27, she is the unmarried mother of three and is raising her kids in one of Philadelphia’s poorest neighborhoods. Would she and her children be better off if she had waited to have them and had married their father first? Why do so many poor American youth like Millie continue to have children before they can afford to take care of them?

Over a span of five years, sociologists Kathryn Edin and Maria Kefalas talked in-depth with 162 low-income single moms like Millie to learn how they think about marriage and family. Promises I Can Keep offers an intimate look at what marriage and motherhood mean to these women and provides the most extensive on-the-ground study to date of why they put children before marriage despite the daunting challenges they know lie ahead.

Praise for Promises I Can Keep

This is the most important study ever written on motherhood and marriage among low-income urban women.
— William Julius Wilson, author of The Bridge Over the Racial Divide

Thankfully, someone has now taken the trouble to ask poor mothers themselves what’s going on. . . . The experts have their theories, but the only real experts are the mothers themselves, and it’s refreshing to hear from them for a change.
—American Prospect

The pair’s refreshingly original results can be found in an essential new book, Promises I Can Keep. Unlike previous explanations for marriageless parenting that seemed so obviously off the mark, Edin and Kefalas’ work is a revelation.
—Celeste Fremon Ms Magazine

Ms. Edin and Ms. Kefalas decisively rescue the young welfare mother from the policy wonks and feminist professors who have held her hostage until recently, and in so doing overthrow decades of conventional wisdom.
—The Wall Street Journal 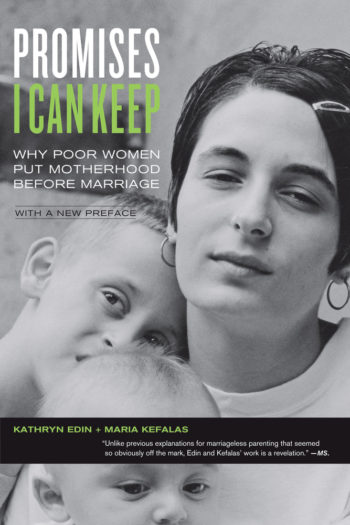