The Recurring Crises of American Democracy

In the aftermath of the 2016 presidential election, Robert Lieberman and Suzanne Mettler, political scientists at Johns Hopkins and Cornell, gathered with a group of colleagues, all of whom were looking for ways to explain the predicament facing democratic institutions in the US. They found themselves asking – and being asked – whether we were headed toward a profound crisis. Might history help us to understand where these threats had come from and how to respond to them?

As their book, Four Threats: The Recurring Crises of American Democracy, makes clear, the looming crisis is not unprecedented. Indeed, we have endured similar ones before, starting in the early days of the republic and continuing to the present. Treating the current moment as unique distorts its meaning and misses the lessons that can be learned from the past.

Understanding which factors led to previous crisis moments offers some guidance about how we might weather the current disruption. And Lieberman and Mettler identify four distinct conditions that have produced democratic disruptions in the past and that also characterize the current political climate. None of them – political polarization, racial division, economic inequality, and executive aggrandizement – are new, but the fact that all of them are in play today is unprecedented, and alarming.

Four Threats is an urgent look at the complex interplay of these factors. By shining light on the durability of American democratic institutions, they also make clear that the challenge of defending and renewing our most essential institutions falls to all of us.

Mettler and Lieberman marshal a wealth of evidence to make their case, and incisively sketch the factors at play in each historical period. Bracing, well-informed history.
– Publishers Weekly

And yet, for the gravity of its subject matter, Four Threats is a lively read about the cracks in the system. What’s more, it offers some good ideas for how we might go about fixing them.
– Jelani Cobb, The New Yorker

Mettler and Lieberman marshal a wealth of evidence to make their case, and incisively sketch the factors at play in each historical period. Bracing, well-informed history.
– Publishers Weekly

In an analysis deeply rooted in American history and animated by an unshakable commitment to democratic values, Mettler and Lieberman issue a cry of political alarm that privileges illumination over hysteria and reminds us that this is not the first time our nation has struggled with demons. Their eloquent call for political and social renewal allies realism with hope, and it could not be more timely.
– E. J. Dionne, Jr., author of Code Red and co-author of One Nation After Trump 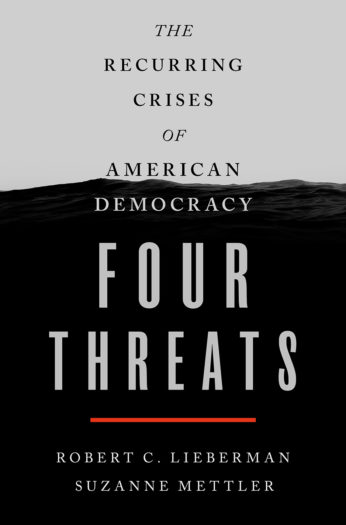