The Reconstruction of America After the Civil War

A sweeping history of the United States from the era of Abraham Lincoln to the presidency of Theodore Roosevelt, West from Appomattox stretches the boundaries of our understanding of Reconstruction. Heather Cox Richardson ties the North and West into the post–Civil War story that usually focuses narrowly on the South, and in so doing, shows that the story of Reconstruction is not simply about the rebuilding of the South after the Civil War.

Instead, the late nineteenth century defined modern America, as Southerners, Northerners, and Westerners gradually hammered out a national identity that united three regions into a country that could become a world power. By weaving together the stories of a wide range of individuals, West from Appomattox paints a compelling portrait of a pivotal period in the formation of modern America.

Praise for West from Appomattox

Richardson tells a different story about the United States as a whole during a reconceptualized period of ‘Reconstruction’ after the Civil War.
—Sheldon Hackney, University of Pennsylvania

With a marvelous sense of scope, narrative lucidity, and thorough research, Heather Richardson makes the convincing case that Americans still live in the world that Reconstruction built—or left partly unbuilt. A skilled historian of political economy, Richardson has here written a new and important synthesis of late-nineteenth-century American society enmeshed in a great struggle to determine just what kind of country the Civil War had wrought. This book is deeply informed and a good read; it spurs our effort to help Americans realize that their reading must not stop with Appomattox.
—David W. Blight, Yale University, author of Race and Reunion: The Civil War in American Memory

A truly fresh reconsideration—and a smart and wonderfully written one—of Reconstruction. Richardson pulls back to a genuinely national perspective, and in doing so gives us a strikingly original view of this vitally important time in the national story.
—Elliott West, University of Arkansas, Fayetteville

The 50 years following the American Civil War often come to us as a blur of disconnected images…a hiatus between the drama of the Civil War and World War I…. But in her ambitious West from Appomattox, Heather Cox Richardson argues that these years, far from being uneventful or insignificant, saw nothing less than the reconstruction of America, a recasting of the relationship between the government and the people… Richardson’s perspective is engaging and reveals much that is fresh.
—Edward L. Ayers, Washington Post Book World

This well-written and perceptive history considers Reconstruction as a national—rather than strictly Southern—phenomenon that united the North, South, and West, and created the creed of middle-class individualism that would define the 20th century.
—Atlantic Monthly

In this superb book, Richardson, a leading economic and social historian of the Civil War era, revises our understanding of Reconstruction. Richardson focuses closely on the last three decades of the 19th century, moving over time seamlessly between the South, North and West. Her concern is the changing concept of the relationships of the government to its citizens.
—John David Smith, Charlotte Observer

An enormously impressive book. Engagingly written, based on research notable both for its depth and breadth, and arguing a bold, sweeping, and intelligent thesis; it is a remarkable achievement…. A landmark contribution to our understanding of the making of the modern United States.
—Keith Cassidy, Canadian Journal of History

Vibrant, fast-moving. . . . A provocative and succinct narrative.
—David A. Lincove, The Historian

This is political history writ large, complete with a cast of characters that reflects the diversity of the American population…Historians of Reconstruction and the Gilded Age cannot afford to it ignore this book or fail to wrestle with the argument.
—Brooks D, Simpson, The Journal of American History. 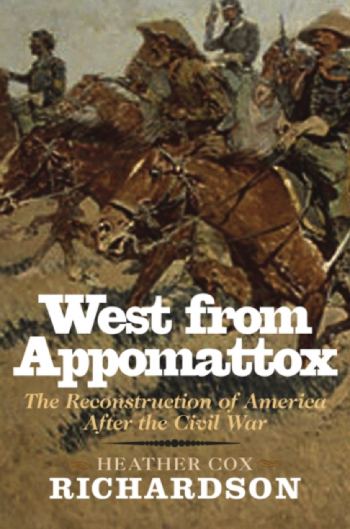