A History from Earliest Times to the Present

For Westerners, “Vietnam” may evoke images of a bloody televised American war that generated a firestorm of protest and brought conflict into their living rooms. But in Viet Nam: A History from Earliest Times to the Present, Ben Kiernan broadens this vision by narrating the rich history of the peoples who have inhabited the land now known as Viet Nam over the past three thousand years.

a leading scholar of Southeast Asia, Kiernan weaves together the many narrative strands of Viet Nam’s multi-ethnic populations, including the Chams, Khmers, and Vietnamese, and its multi-religious heritage, from local spirit cults to Buddhism, Confucianism, and Catholicism. He emphasizes the peoples’ interactions over the millennia with foreigners, particularly their neighbors in China and Southeast Asia, in engagements ranging from military conflict to linguistic and cultural influences.

Despite the tragedies of the American-Vietnamese conflict, Viet Nam has always been much more than a war. Its long history been characterized by the frequent rise and fall of different political formations, from ancient chiefdoms to imperial provinces, from independent kingdoms to divided regions, civil wars, French colonies, and modern republics. In addition to dramatic political transformations, the region has been shaped by its environment, changing climate, and the critical importance of water, with rivers, deltas, and a long coastline facilitating agricultural patterns, trade, and communications.

Kiernan departs from nationalist narratives to investigate the changing cultural, political, and ecological relations of the multiethnic communities that inhabited the diverse regions of Vietnam. His deep historical study exposes the folly of reducing Vietnam to a war, a metaphor of US imperialism, or the experiences of one ethnicity. Adopting a long-term approach that combines microhistory and macrohistory to decipher the multicausal forces driving historical processes, the author examines a time span of 3,000 years, beginning with the first Bronze Age chiefdoms and ending with the changing fortunes of the contemporary nation-state….The analysis is innovative for incorporating the roles of climate, water, and geography in explanations of historical continuity or change and for making ample use of archaeological and textual source materials. Valuable for both newcomers and experts in Vietnamese history. Highly recommended.
—Choice

This ambitious survey is pathbreaking not only in its chronological scope (from prehistory to the present) and the breadth of its sources but also in its thematic reach….Although the war against the United States is an important part of Vietnam’s story, it takes its place in the broad sweep of history as just one episode in a long series of struggles that people have waged over this piece of land.
—Andrew J. Nathan, Foreign Affairs

[In] this major new history of the country…. K iernan makes the actualities of Vietnamese life and landscape a central focus…. Where Kiernan excels is in his engagement with the complex cultural and environmental factors that make the country so distinctive. In particular, he highlights the country’s ‘aquatic culture’ from prehistoric times right up to this day…[He] makes sure that Vietnamese women themselves are heard in his narrative and are not simply defined by men…. Kiernan’s readiness to detect and define the significant details lurking in the sweeping historical panorama, make Viet Nam a major contribution to contemporary Southeast Asian scholarship…. [A] sympathetic study of a tenacious and capable people.
—Robin Gerster, Australian Book Review

This is a remarkably evocative, multifaceted, sophisticated, and original study not only of those groups who haltingly coalesced as Vietnamese, but also of the many peoples with whom they interacted, and indeed of an entire region during two millennia. This book, I suspect, will become a classic in Asian as well as Southeast Asian historiography.
—Victor Lieberman, University of Michigan

An audacious book, Kiernan’s Viet Nam presents the country’s long history to new, global audiences, eloquently showing how the deep past continues to shape and inform the present.
—David Biggs, author of Quagmire: Nation-Building and Nature in the Mekong Delta

This outstanding book shows that ‘Viet Nam has always been much more than a war.’ By making his themes the perennial continuities and changes in the vital ecologies and polyethnic cultures of the country, Ben Kiernan tells a story of shifting layers that is lucid and rich. His work is a kaleidoscope of Vietnamese history.
—Greg Lockhart, author of Nation in Arms: The Origins of the People’s Army of Vietnam

Kiernan offers a comprehensive overview of Vietnamese history from prehistoric times to the 21st century…A distinctive quality of this work is its inclusion of environmental and linguistic history. The author effectively explains how geography and changing weather patterns (droughts, etc.) impacted historical development and demonstrates how changes in language over time provides information about Vietnam’s past…Essential for all students of Vietnamese history. Extensive descriptions of Vietnam’s relations with its neighbors also make this valuable reading for those interested in Chinese or Southeast Asian history.
—Library Journal 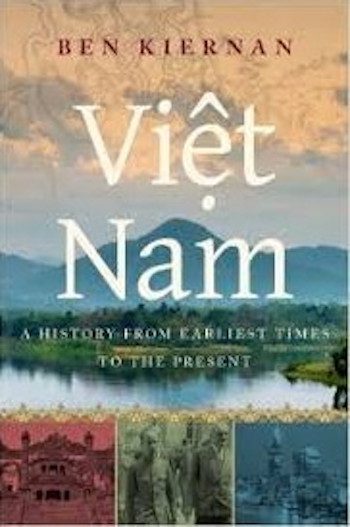