The Christian Church and the Selling of the American Soul

It’s becoming commonplace – first government, and then arts organizations, colleges, schools are being “reinvented” in the business model. Even the PTA is remaking itself in the corporate model. So, we should hardly be surprised to find that churches are doing exactly the same thing. In response to congregations that increasingly demand that their churches be shaped by what members want, churches are increasingly serving up entertainment, easy listening, and approval.

In Thieves in the Temple: The Christian Church and the Selling of the American Soul, Jeffrey MacDonald takes us on a tour through this new religious landscape. He sees churches bending over backwards to accommodate the wishes of an increasingly self-absorbed membership, and abandoning the unique authority that the church has long had in American society to push back against the tide, to challenge the conventional wisdom.

Thieves in the Temple offers an original perspective on the state of the church in America today, speaking broadly and passionately to people of all faiths, and to anyone interested in the role of religion in a society committed to democracy, justice, and equality.

Praise for Thieves in the Temple

The author bemoans the rise of such institutions and calls for nothing less than a return to basics and a new religious reformation…Thieves in the Temple is a sobering call-to-arms and might be an important first step.
— Tucson Citizen

MacDonald does outstanding work…As a journalist and minister, he’s uniquely able to understand the problem from the inside out, and he supports his thesis well.
— Christian Science Monitor

Jeffrey MacDonald writes with a journalist’s eye and a preacher’s heart. The crisis he identifies in this provocative and timely book has serious implications not only for America’s religious life but also for our broader culture and politics.
— Dan Rather, Global Correspondent and Managing Editor of HDNet’s Dan Rather Reports

No one seriously concerned about the future of the churches can afford to miss MacDonald’s critique and vision.
— Rev. Dr. Roy J. Enquist, Emeritus professor, Gettysburg Seminary and former Canon, Washington National Cathedral 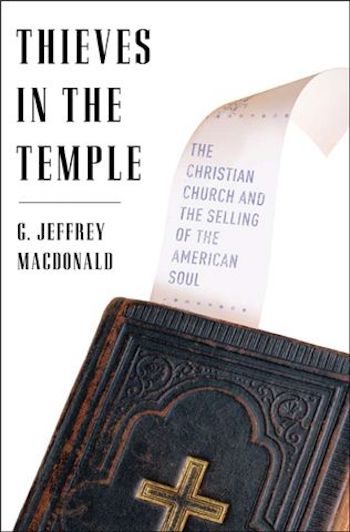