How the Census Has Shaped Nations, from the Ancient World to the Modern Age

The 2020 census is still a year away, but the politics around it are in full swing. The NAACP has filed a suit claiming that the Census Bureau has insufficient funds to properly conduct the 2020 census, risking a massive undercount of blacks and other racial and ethnic minorities. And a federal judge has ruled that Commerce Secretary Wilbur Ross must sit for a deposition over the inclusion of a citizenship question on the 2020 Census. It’s going to be an interesting count.

As economist Andrew Whitby illustrates in The Sum of the People: How the Census Has Shaped Nations, from the Ancient World to the Modern Age, the census has often been controversial. Its history also provides a surprising and incisive look at our attitudes about citizenship, ownership, and power.

With roots that go back thousands of years to China and the Fertile Crescent, the census has long reflected, as well as shaped, society. Its purpose has changed as our perpective on and trust in government have changed. It has been used for good and for ill. And today, as data is being collected about all of us, all the time, the history of the census intersects with some very contemporary debates.

Praise for The Sum of the People

… a shockingly captivating history of the census, from the first enumeration efforts in Ancient China to the recent citizenship question controversy in the United States.
—Booklist

… a timely and eye-opening look at the 3,000-year history of census taking from around the globe, how this task can tell the story of the world’s people, and where the census might be headed in the future.
—Library Journal

Timely … Whitby makes a persuasive case…Those with a deep interest in the subject will find this comprehensive account rewarding.
—Publishers Weekly 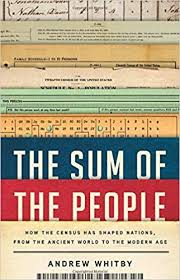