The Freedom Struggles of James Eastland and Fannie Lou Hamer

Sunflower County, in the heart of the Mississippi Delta, stood at the epicenter of Civil Rights activism in the 1960s, in part because it was a black majority county in which white cotton farmers held all the power, and in part because Senator James Eastland and activist Fannie Lou Hamer, two of its most prominent citizens, were such compelling, and contrasting symbols of the struggle.

The Senator and the Sharecropper is the story of how Eastland and Hamer’s lives, their vast differences, and their occasional similarities, reveal a great deal about how freedom has been defined, championed, and stymied in the South, and in America more widely. What happened in Sunflower County illuminates issues of race and economics that often were obscured elsewhere, and The Senator and the Sharecropper is a story of two remarkable individuals who lived through a particularly turbulent time in a particularly turbulent place.

Praise for The Senator and the Sharecropper

It’s satisfying to watch the tide of history overtake the largely unrepentant (and all but forgotten) senator, and see Hamer, famously “sick and tired of being sick and tired,” become a legend in the Delta and throughout the country.
—Publishers Weekly

a detailed and impassioned look at the Delta that produced Eastland and Hamer and the historical, social, and economic factors that informed their lives.
—Booklist

Compelling…Asch uses the stories of Hamer and Eastland to understand the Sunflower County of the present, to comprehend the economic stagnation that African American residents still face today and to make sense of the unspoken rules that continue to govern racial interactions in the twenty-first century.
—Reviews in American History 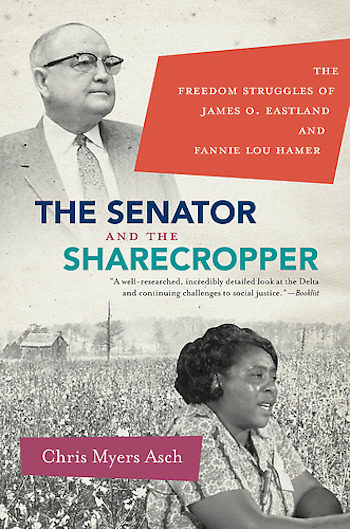