Eight Unconventional CEOs and Their Radically Rational Blueprint for Success

Atul Gawande uses the term “positive deviant” to describe unusually effective performers in the field of medicine. To Gawande it is natural that we should study these outliers in order to learn from them and improve performance.

Surprisingly, however, in business the best are not studied as closely as in other fields. The Outsiders is an attempt to remedy that gap. It tells the stories of this group of eight managerial “positive deviants,” each of whom ran a publicly traded company and generated extraordinary returns for their shareholders, dramatically outperforming both Jack Welch, General Electric’s legendary former CEO, and, perhaps more impressively, their peers. Many of them are virtually unknown, despite the enormous gap between their performance and that of many of today’s “rock star” CEOs. More important, the book shows readers how they achieved their remarkable results and presents a different roadmap for what it takes to be a great CEO than that offered up by the popular media.

These eight CEOs represent a refreshing rejoinder to this stereotype. As a group, they shared old-fashioned, pre-modern values including frugality, humility, independence and an unusual combination of conservatism and boldness. They eschewed perks such as corporate planes, avoided the spotlight wherever possible and rarely communicated with Wall Street or the business press. They also actively avoided bankers and other advisors, preferring their own counsel and that of a select group around them. Ben Franklin would have liked these guys.

The CEOs covered in The Outsiders were not marketing or technical geniuses. They did not have unique retail or restaurant concepts nor did they have proprietary technologies. They were frugal, humble and independent. They had neither the charisma of Sam Walton or the marketing or technical genius of Steve Jobs. In fact, their circumstances were a lot like those of the typical American business executive. Their results, however, were anything but quotidian and their experiences hold powerful lessons for today’s CEOs.

Praise for The Outsiders

An outstanding book about CEOs who excelled at capital allocation.
— Warren Buffett

One of the Most Important Business Books in America.
— Forbes

Thorndike wants to give any manager or business owner the confidence to occasionally do things differently from your peers … to make the most of the cards they’re dealt and to delight their shareholders.
— Financial Times 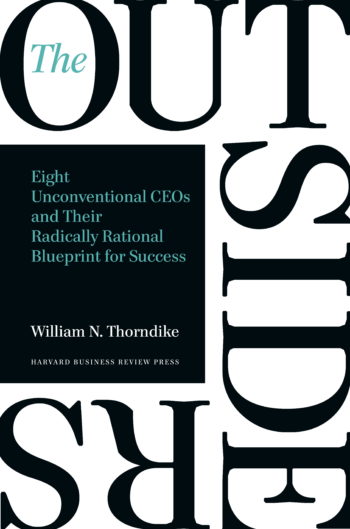