In Origins of Existence astrophysicist Fred Adams takes a radically different approach from the long tradition of biologists and spiritual leaders who have tried to explain how the universe supports the development of life. He argues that life followed naturally from the laws of physics — which were established as the universe burst into existence at the big bang. Those elegant laws drove the formation of galaxies, stars, and planets — including some like our Earth. That chain of creation produced all the tiny chemical structures and vast celestial landscapes required for life. Ultimately, physical laws and the complexity they generate define the kind of biospheres that are possible — from an Amazon rain forest to a frigid ocean beneath an ice sheet on a Jovian moon.

Adams suggests that life was not merely some lucky break, but rather a natural outcome of the ascending ladder of complexity supported by our universe. Since our galaxy seems to harbor millions of planets with the same basic elements of habitability as Earth, the emergence of life is probably not a rare event. If life emerges deep inside planets and moons, as new research suggests happened on our planet, the number of viable habitats is truly enormous. Seven chronological chapters take the reader from the laws of physics and birth of the universe to the origins of life on Earth — showing how energy flowed, exploded, and was repeatedly harnessed in replicating structures and organisms.

In his groundbreaking first book, Fred Adams established the five eras of the universe with a focus on its long-term future. It is perhaps not surprising that he now turns his attention to the mystery of our astronomical origins. Here is a stunning new perspective, a book of genesis for our time, revealing how the laws of physics created galaxies, stars, planets, and even life in the universe.

Praise for The Origins of Existence

In this beautifully written book, Fred Adams does a terrific job of describing our current understanding of what’s been going on in the last 14 billion years, as elaborate galaxies, stars, planets, and people have emerged from a smooth and simple Big Bang. This book is original, delightful, and full of ideas.
— Robert P. Kirschner, Harvard University, author of The Extravagant Universe 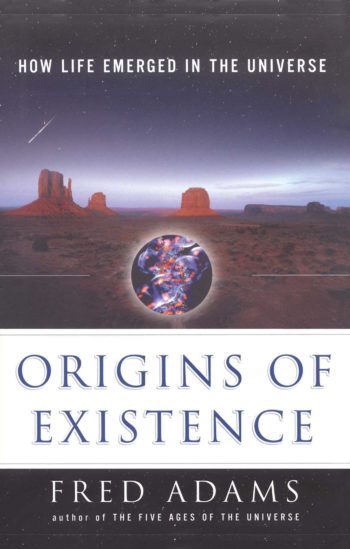