Histories of the Revolutionary War are replete with heroes, and Nathan Hale is a favorite among them. In The Martyr and the Traitor, Virginia DeJohn Anderson puts Hale’s story and by association, our understanding of the Revolution, in a strikingly new light by considering his life side by side with the life of Moses Dunbar. Dunbar, a contemporary of Hale, was a loyalist who also was executed in the cause of the war, albeit a different cause. Given that when these two men died there was every indication that the British would win the war, history might easily have found Dunbar to be the martyr, and Hale the traitor.

In September 1776, these two men from Connecticut each embarked on a dangerous mission. Hale, a soldier disguised as a schoolmaster, made his way to British-controlled Manhattan and began furtively making notes and sketches to bring back to the beleaguered Continental Army general, George Washington. Dunbar traveled to New York to accept a captain’s commission in a loyalist regiment before returning home to recruit others to join British forces. Neither man completed his mission. Both met their deaths at the end of a hangman’s rope, one executed as a spy for the American cause and the other as a traitor to it.

Virginia  Anderson offers an intertwined narrative of two lives, and reveals how their relationships within their families and communities became politicized as the imperial crisis with Britain erupted. She explores how these men forged their loyalties in perilous times and believed the causes for which they died to be honorable. Their experiences remind us of how the Revolution affected ordinary lives and how the stories of patriots and loyalists were remembered – and forgotten – after independence.

Praise for The Martyr and the Traitor

This is a tale of two men, two causes and two tragedies: two Connecticut farm boys who yearned for something better, two young men caught up in the fearsome tumult of revolution, two steadfast soldiers who refused to repent before they hanged. One is well-known: Nathan Hale, the American spy who regretted that he had but one life to lose for his country. The other is Moses Dunbar, a lowly Anglican Loyalist whom most of his countrymen wanted to forget… a moving coming-of-age (and end-of-life) story as well as a military history and a spy thriller.
—The Wall Street Journal

Groundbreaking and relevant….Highly engaging, eloquent, and convincing, the narrative at once further complicates and yet clarifies how the Revolution played out on a localized scale….Anderson presents sophisticated scholarship in an inviting manner and really opens up the world of Hale and Dunbar to the reader along with the crucial reminder that American independence was not a foregone conclusion and how easily things could have been different….A page turner.
—Kelly Mielke, Journal of the American Revolution

By examining the short lives and dramatic executions of two passionate young men on opposing sides, Virginia DeJohn Anderson illuminates the painful political decisions demanded by a complex revolution and the swirling fortunes of war.  With careful research and in deft prose, Anderson brilliantly recovers the human drama and life-and-death stakes of the civil war that we call the American Revolution.
—Alan Taylor, author of American Revolutions: A Continental History, 1750-1804

No less than others, the American Revolution was not just a matter of declarations and high-mindedness, but a bitter internal conflict that tore apart individuals, families and their communities. Anderson’s fine work exposes to view these often hidden realities.
—Publishers Weekly

This dual biography of a famous patriot and a virtually unknown loyalist demonstrates the perplexing choices many Americans faced during the Revolution…Its real value (there is little available information on the men themselves) is the author’s meticulous untangling of the social, educational, cultural, economic, and religious threads that eventually led people with similar backgrounds to choose opposite sides in the conflict. This engaging, lucid micro-study reminds readers that when history is written by the winners, much gets left out….Recommended.
—Choice

The Martyr and The Traitor exemplifies Virginia Anderson’s scholarly finesse and literary skill. The opening is simply stunning.  It is not just the rich narration that gives the book power, the elegance of its argument. Anderson reminds us that while it is easy to kill a man, it is impossible to control the lessons people might draw from such an act.
—Laurel Thatcher Ulrich, author of A Midwife’s Tale 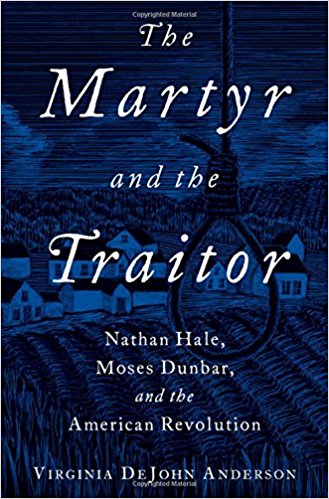 2017 Journal of the American Revolution Book of the Year Award