At the National Museum of African American History, there is a brief mention of the slave traders Isaac Franklin, John Armfield, and Rice Ballard, who in the 1830s came to dominate the domestic slave trade in the United States. Yet little has been written about slave traders. But as dark as the account of men who traded in human lives may be, we cannot fully understand our history without coming to terms with how slave traders insinuated themselves into a central place in American society and commerce, and into the formation of the nation.

That is the complicated and troubling history that Joshua Rothman examines in The Ledger and the Chain. In this brilliant and original book, he examines the lives and the motivations of three men who chose to dedicate their lives to a brutal business. By following the paths that Franklin, Armfield, and Ballard pursued, he shows how fully they were integrated into the social and commercial life of their time, even though history has pointedly attempted to ignore them.

Among the most devastating observations is that, monstrous though their work was, society readily tolerated them and enabled their enterprise. By letting their financial interests prevail over any sense of decency, Americans allowed slave traders like Franklin, Armfield, and Ballard to flourish, to amass vast wealth, and to became essential to the functioning of capitalism in this country. As The Ledger and the Chain makes plain, slave traders were essential actors in the economy of the 19th century and the implications can still be felt. Getting to know who they were is part of getting to know ourselves.

Praise for The Ledger & the Chain

A searing account of the reprehensible life’s work of Franklin and his remorseless business associates. Other scholars have produced accounts of the domestic slave trade. Mr. Rothman writes about slave traders, and puts an indelible face on their inhumanity… One need not embrace so-called Critical Race Theory to understand the critical importance of retelling this painful tale. ―Wall Street Journal

Tremendous…[The Ledger and the Chain] intertwines a careful biography of a very successful business with unflinching attention to the monstrosity that business was built upon.
―Slate

In smoothly readable prose and with an unflinching moral eye, Rothman uses the biographies of a few key players to investigate the internal slave trade of America in the years before the Civil War.
―Christian Science Monitor

Slave traders aren’t often called out by name, and therefore are subjected to little accountability. But Rothman shines a light on how these human traffickers were responsible for crimes against humanity, the sale of over half a million enslaved people among them.
―Fortune

Rothman employs his wide breadth of knowledge about the era to vividly depict the human and economic impacts of the domestic slave trade as it burgeoned in the early 19th century…An excellent work of vast research that hauntingly delineates the ‘intimate daily savageries of the slave trade.’
―Kirkus, starred review

Through meticulous archival research, Rothman debunks the myth that slave traders were social outcasts and tracks how their brazen advertisements and abusive treatment of captive men, women, and children were used by abolitionists to stoke public outrage. This trenchant study deserves a wide and impassioned readership.
―Publisher’s Weekly, starred review

Wide ranging and meticulously documented…A must read account that sheds light on the interdependence of slavery and capitalism in the United States.        ―Library Journal 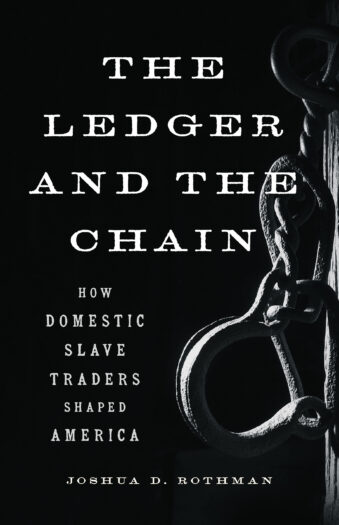