How Nations Fight, Trade, Maneuver, and Manipulate in a Digital Age

The transformation that cyberspace is bringing to world affairs is profound, and managing the challenges are the strategic imperative of the twenty-first century. At the same time, economic, political, and technological decisions made by governments, corporations, and individuals are continually shaping and reshaping the Internet, sometimes for the greater good and others for narrow if not malevolent interests.

The Internet has evolved from a place without governments to the highly contested space where states are now not only reasserting national authority but also engaged in espionage, conflict, and wide-spread surveillance. Approaches to governing the internet are driven by various motives: China, for example, does not want to be dependent on the West for technology; Europeans do not trust Google or Facebook with their data; Israel wants to derail the Iranian nuclear weapons program; and India wants to limit the spread of communal violence and prevent Pakistani terrorist from using blackberries to coordinate their attacks. The implications of these different approaches are felt not only by the White House or the State Department; they shape what corporations and individuals can do and know in cyberspace.

The Hacked World Order considers the implications of a newly emerging cyber statecraft, one that brings with it issues of privacy, security, freedom of expression, and innovation that will reverberate into all aspects of economic, political, and social life.

Praise for The Hacked World Order

[Adam Segal] gives us plenty of reasons to wonder how long global powers will keep from going ‘nuclear’ in cyberspace.
—Wall Street Journal

Segal examines numerous instances of cyberwar, some of which may come as news to readers…Netizens and white-hat programmers will be familiar with Segal’s arguments, but most policymakers will not—and they deserve wide discussion.
— Kirkus Reviews 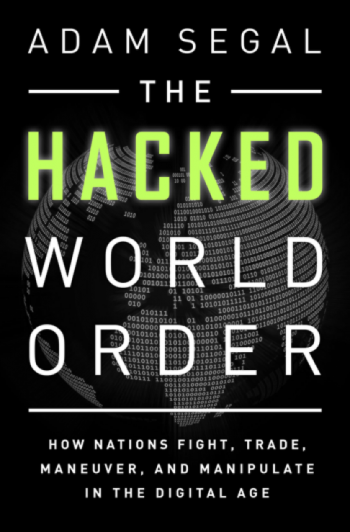