Radically Rethinking the Origins of Our Universe

Cosmologists are discovering, thanks to breakthroughs in the science and the technology of astrophysics, that the very first seconds, even milliseconds, after the Big Bang hold answers to many of the questions about the origins of the universe. We now know a great deal about the formation of stars and galaxies, and there is very high confidence in the theory of the Big Bang. But until recently, we knew virtually nothing about what happened immediately afterwards.

In At the Edge of Time: Radically Rethinking the Origins of Our Universe, Dan Hooper proposes that what we are learning about that crucial instant has brought us to the verge of a cosmological revolution. An astrophysicist at Fermilab, America’s premier particle physics laboratory, he is very close to the research that is revealing answers to some of the most interesting, and perplexing, questions about the nature of the world in which we live. In The Edge of Time, he focuses on what we know – and what we are still striving to understand – about the most intriguing and mysterious period in our universe’s history.

Praise for At the Edge of Time

Hooper takes the reader on a tour of our collective ignorance about the early universe. . . . Science is a messy endeavor, with dead ends and false alarms and backtracking; that can still be an interesting story, and this book succeeds in explaining both what we do know about the universe’s origins and what remains unknown. —The Space Review

Scientists know precious little about what happened when the universe got its start: many cosmologists think space and time underwent an extremely rapid expansion called inflation, yet this theory raises as many questions as it answers. . . . Hooper takes readers on a mind-bending expedition through these questions and shows how they all connect to the beginning. —Scientific American

If you’re mystified and curious about the mysteries of the Universe, including dark matter, dark energy, and cosmic inflation, and want a unique take on all of these puzzles with a peek behind how science-in-action works, you won’t want to miss this book. —Forbes

Beginning with Carl Sagan’s Cosmos in 1980, Big Bang books have become a genre that curious readers should check out every few years to keep up with breakthroughs (gravity waves being the latest). They can’t go wrong with Hooper’s. A lucid account that is neither dumbed down nor overly difficult. —Kirkus Reviews, starred review 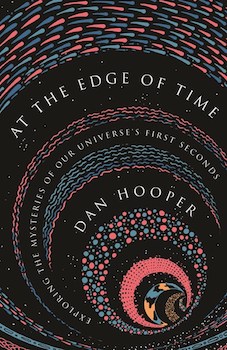