Rants and Screeds of Rageboy

From the hilarious to the sublime, the essays and observations of cultural commentator extraordinaire, Chris “RageBoy” Locke. In more ways than one, Chris Locke has raised a godawful racket on the Net. Under his alter-egotistical nom de plume, RageBoy, and through his webzine, Entropy Gradient Reversals, he has entertained and enlightened thousands of readers from some of the world’s largest companies, governments, and institutions-including those from which he’s managed to escape.

Now for the first time in browser-free format, The Bombast Transcripts brings together the best of his worst. And his worst is very good indeed. Part scathing send-up of commercial techno-fetishism, part hysterical stand-up on the theme of spiritual bankruptcy, part intimate memoir of a vibrant and uncompromising life, The Bombast Transcripts will rock you, shock you, and leave you pondering what The Economist once called “the wisdom of RageBoy.”

Praise for The Bombast Transcripts 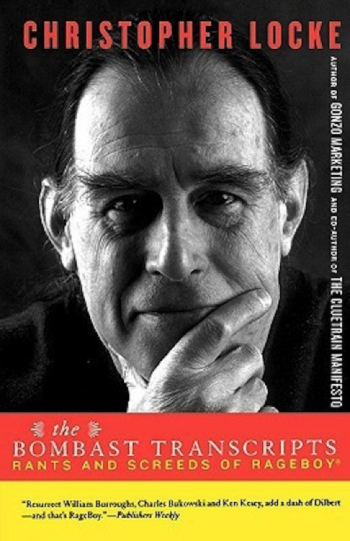