How Black Mothers Fought Their Own War on Poverty

It was a spring day on the Las Vegas strip in 1971 when Ruby Duncan, a former cotton picker turned hotel maid and the mother of seven, led a procession. Followed by an angry army of welfare mothers, they stormed Caesar’s Palace to protest Nevada’s decision to terminate their benefits. The demonstrations went on for weeks, garnering the protesters and their cause national attention. Las Vegas felt the pinch and, ultimately, a federal judge ruled to reinstate benefits. It was a victory for welfare rights advocates across the country.

In Storming Caesars Palace, Annelise Orleck tells the story of how a group of welfare mothers and their supporters built one of this country’s most successful antipoverty programs. Declaring that “we can do it and do it better” these women proved that poor mothers are the real experts on poverty. In 1972 they founded Operation Life, which was responsible for all kinds of firsts for the poor in Las Vegas—the first library, medical center, daycare center, job training, and senior citizen housing. By the late 1970s, Operation Life was bringing millions of dollars into the community each year.

Ultimately, in the 1980s, Ruby Duncan and her band of reformers lost their funding with the country’s move toward conservatism. But the story of their incredible struggles and triumphs still stands as an important lesson about what can be achieved when those on welfare chart their own course.

An up-close and personal account of nine strong-minded African-American women who became welfare-rights activists in Las Vegas . . . A worthy history of the country’s changing attitudes toward welfare and the various attempts to eradicate poverty.
—Kirkus Reviews

A poignant counterpoint to the current culture of cynicism and despair. After reading Storming Caesars Palace, you’ll want to get up and do something to make the world a better place.
–Hagar Scher, Chicago Tribune

This amazing story is like a truly great novel, the revelation of a world unknown.
—Dorothy Allison, author of Bastard Out of Carolina 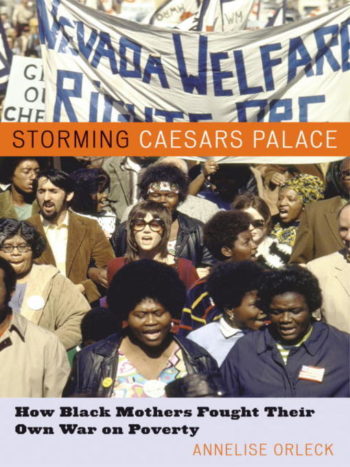