The G.I. Bill and the Making of the Greatest Generation

Winner of the 2006 J. David Greenstone Prize and the 2006 Gladys Kammerer Award

Transcending the boundaries of class and race, the G.I. Bill enabled a sizable portion of the hallowed “greatest generation” to gain vocational training or to attend college or graduate school at government expense. Its beneficiaries had grown up during the Depression, living in tenements and cold-water flats, on farms and in small towns across the nation, most of them expecting that they would one day work in the same kinds of jobs as their fathers. Then the G.I. Bill came along, and changed everything. They experienced its provisions as inclusive, fair, and tremendously effective in providing the deeply held American value of social opportunity, the chance to improve one’s circumstances.

But the G.I. Bill fueled not only the development of the middle class: it also revitalized American democracy. Americans who came of age during World War II joined fraternal groups and neighborhood and community organizations and took part in politics at rates that made the postwar era the twentieth century’s civic “golden age.” In an age of rising inequality and declining civic engagement, Soldiers to Citizens offers critical lessons about how public programs can make a difference.

Praise for Soldiers to Citizens

As a beneficiary of the G.I. Bill, I can’t recommend enough Suzanne Mettler’s examination of the Bill and its transformative effect on the lives of so many veterans like me…This book is a must-read not o nly for those interested in the ‘Greatest Generation’ but also for anyone who wants to know what it takes ot make a great country.
— Bob Dole, Former U.S. Senator

Suzanne Mettler has written a magnificent book, showing how the GI Bill enabled soldiers returning from World War II to become fully participating citizens in American democracy. … general readers will see what government at its best can do to spread opportunity and enrich citizenship in America.
–Theda Skocpol, Victor S. Thomas Professor of Government and Sociology, and author of Diminished Democracy: From Membership to Management in American Civic Life

Mettler reminds us that the last time we expanded the educational horizons of young Americans, and gave generously to them, they responded in kind.
—Wilson Quarterly 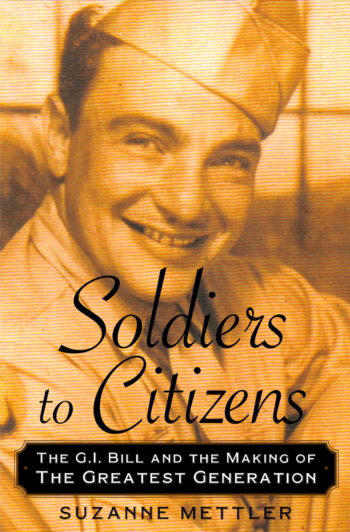