A Chronicle of Mutiny and Freedom on the Wild Coast

One of NPR’s Best Books of the Year

On Sunday, February 27, 1763, slaves in the Dutch colony of Berbice on the Caribbean coast of South America launched a massive rebellion. No Atlantic slave uprising ever succeeded, except for the 1791 revolt in St. Domingue, but the Berbice rebellion came amazingly close. The insurgents killed several dozen Europeans and sent the rest ﬂeeing, and they kept them at bay for months. In the end, the rebels ran out of food, weapons, and ammunition, and the Dutch regained their colony. They tried the participants, leaving behind an unprecedented account of an extraordinary event and providing a detailed view of the rebellion and counter-insurgency. That view challenges prevailing views of slave rebellion, European mastery, and Atlantic revolutions, including our own.

Blood on the River: A Chronicle of Mutiny and Freedom on the Wild Coast charts what a slave rebellion and its suppression looked like in a tropical colony. Surrounded by jungle and savannah, the revolutionaries, Amerindians, and Europeans parried and counter-parried against a backdrop of the larger Atlantic world. Initially, the slave rebels held the advantage against the Dutch governor. Then, as both sides struggled with shortages of food and weapons, internal divisions and political discontent followed. In the end, the Dutch prevailed because of one unique advantage—their long Atlantic reach. Unlike the rebels, the Dutch could get soldiers and supplies from neighboring colonies and from Europe.

By paying attention to the internal politics of rebellion, Blood on the River tells a story of all the participants, including women and those who chose not to participate, and in so doing complicates the story of rebellion. The Berbice Rebellion, so much lengthier and better documented than most, exposes the tensions, ﬁssures, and inequalities that were present in slave communities, and shows how these characteristics shape insurgency.

Praise for Blood on the River 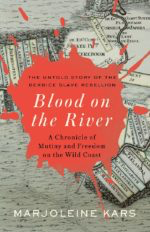