The Struggle for Labor Rights and the Making of Modern Politics

In the 1930s, a fierce struggle over the rights of workers was waged in the agricultural fields of California. Infuriated by the increasing militancy of workers during the Great Depression, California growers and their allies responded with mob assaults and official repression. Carey McWilliams used the term “farm fascism” to describe the response of corporate growers to the unionization of their workers.

Some of the keenest observers of the Depression understood that the strikes were pivotal in modern American history, but as historian Kathryn Olmsted shows in Right Out of California: The Struggle for Labor Rights and the Making of Modern Politics, the reaction to the strikes were even more significant than the events themselves. They would lead to the transformation of American conservatism into a very different movement. In response to the labor wars, conservatives abandoned their faith in government to protect business interests and turned to the modern arts of public relations and advertising to make their case to the public.

California would be – as it often has been – ahead of the curve. As Right Out of California makes clear, political consulting, and the tactics of the radical right emerged much earlier than we have been led to believe. They took shape in the fertile fields of the west and then spread nationwide. We have been living with the consequences ever since.

Praise for Right Out of California

Olmsted’s vivid, accomplished narrative really belongs to the historiography of the left…as her strong research shows, race and gender prejudice informed or deformed, almost the whole of American social and cultural life in the 1930s and was as common on the left as on the right.
— The New York Times Book Review

An accessible work that aids in contextualizing the rise of future conservative leaders.
— Publishers Weekly 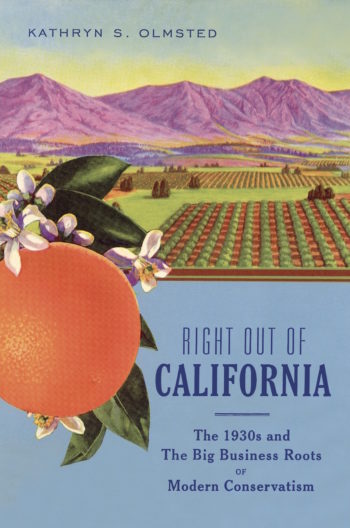