The Intrepid Wanda Jablonski and the Power of Information

Given the overwhelming evidence of global warming, and debates about the future of the energy industry, it’s helpful to put it all in context by looking back to the birth of the industry. We have come a long way from a time when an informal club of engineers, geologists and accountants managed the international oil world.

Into that club stepped Wanda Jablonski, a Slovakian-born American journalist, who wielded extraordinary influence over the 20th century’s wealthiest industry. Queen of the Oil Club introduces the woman whom Daniel Yergin has compared to muckraking journalist Ida Tarbell, calling her one of the two great women journalists of the 20th century who “had a far-reaching impact on the world oil industry.” Jablonski shed light on the deeply secret world of the international oil trade and her story and her incomparable access to the story behind the rise of OPEC lets us in on the real dynamics of oil politics at a time when that kind of understanding couldn’t be more important.

Praise for Queen of the Oil Club

How one woman hurdled journalism’s gender barrier to help shape the future of Big Oil… Intimate but also sweeping, capturing the myopia of both business and government as America’s addiction to foreign oil set in over four decades
— Kirkus Reviews

This lively biography of journalist Wanda Jablonski begs for a big-screen adaptation. In the 1950s, when women were rarely hired as business reporters, Jablonski became a force in the oil industry, boldly investigating deals and tracking the trade from London to Abu Dhabi.
—More Magazine

Rubino, who worked with Jablonski on her innovative industry newsletter, Petroleum Intelligence Weekly, has written the first major biography of this irresistible trailblazer and it is galvanizing in its revelations . As she vividly portrays Wanda in all her toughness and loneliness, Rubino recognizes the depth of Wanda’s commitment to accurately and respectfully portraying the cultures of the Middle East and her belief that a nuanced understanding of this pivotal region was essential to world politics
—Booklist 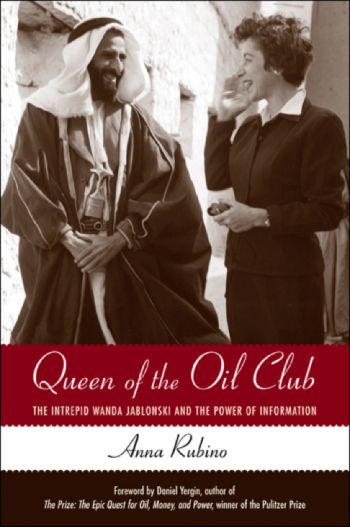