When Librarians, Soldiers, and Spies Banded Together in World War II Europe

The second world war would see an unlikely band of librarians, archivists, and scholars travel abroad to aid the Allies’ cause. Galvanized by the events of the war into acquiring and preserving the written word, as well as provide critical information for intelligence purposes, they set off on missions to collect foreign publications and information across the continent. They travelled to neutral cities in search of enemy texts, followed a step behind advancing armies to capture records, and seized Nazi works from bookstores and schools. When the war ended, they found looted collections hidden in cellars and caves. Their mission was to document, exploit, preserve, restitute these documents, and even, in the case of Nazi literature, to destroy them.

While armies have seized enemy records and have taken rare texts as booty throughout history, it was only in World War II that collecting books and documents became an American war aim. In her fascinating work, cultural historian Kathy Peiss reveals how book and document collecting became part of the new apparatus of intelligence and national security, military planning, and postwar reconstruction. Focusing on the ordinary Americans who carried out these missions, she shows how they made decisions on the ground to acquire primary sources that would be useful in the war zone as well as on the home front.

These collecting missions also boosted the postwar ambitions of American research libraries, offering a chance for them to become great international repositories of scientific patents, literature, and historical sources. Not only did their wartime work have lasting implications for academic institutions, foreign-policy making, and national security, it also led to the development of today’s essential information science tools.

Illuminating the growing global power of the United States in the realms of intelligence and cultural heritage, Peiss tells the story of the men and women who went to Europe to collect and protect books and information. Her narrative broadens and enriches the debate over the use of data in times of both war and peace.

Information Hunters presents a fascinating, and until now little-known, story. Writing in an engaging style, Ms. Peiss synthesizes an array of historical details, intriguing personalities and byzantine bureaucratic divisions … The history of librarianship isn’t as quiet as some of us might believe.
– Wall Street Journal

Peiss has done stellar work unearthing the contributions of librarians and archivists in collecting and preserving documents in Europe, actions that aided the U.S. government in its efforts to end the war.
– Booklist

Information Hunters is Kathy Peiss’s wonderfully surprising history of a little-known, World War II intelligence effort to gather newspapers, magazines, books, and every other kind of printed information about business, science, and ordinary life in Germany and occupied Europe. Working mainly through cities in neutral countries – Lisbon, Stockholm, Bern, and the like – agents quietly arranged to gather bundles, then truckloads, finally ship- and train-loads of books and paper for analysts to study. It’s a beautiful piece of scholarship that reveals the war in a new light – as a struggle for knowledge and truth.
– Thomas Powers, author of Heisenberg’s War: The Secret History of the German Bomb 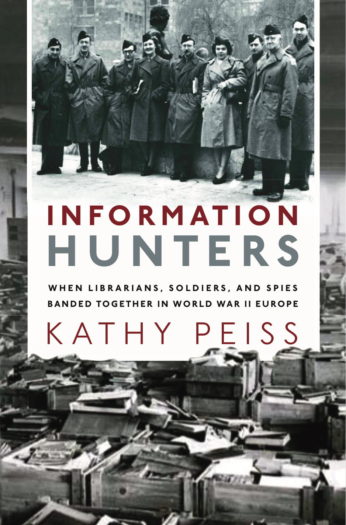