How a Dangerous Mathematical Theory Shaped the Modern World

Shortlisted for the Phi Beta Kappa Award in Science

It’s intuitively appealing to imagine a line as composed of infinitely small individual points – or “indivisibles,” as they’re called in mathematics. After all, we know that wood is a composite of individual fibers, and a rope is composed of individual strings, so we would expect the same to be true of the lines and solids of mathematics. But while the concept of indivisibles might seem natural to us today, it was once savagely criticized. Indeed, in the 17th century indivisibles were deemed so dangerous by the Jesuits that they were decreed heretical.

What made this idea – one that fuels the calculus, and innumerable discoveries and inventions from kitchen appliances to iPhones – so threatening, and how it went on to redefine the nature of science is the story that Amir Alexander tells in Infinitesimal: How a Dangerous Mathematical Theory Shaped the Modern World. To the Jesuits, the infinitely small upended the belief in a world that operated according to strict and predictable laws – and the hierarchy that enforced them. To Galileo, Newton, and scores of other mathematicians and scientists who challenged that hierarchy, it made scientific progress possible.

The statement that “the mathematical continuum is composed of distinct indivisibles” sounds innocent enough to us, but it had world-changing repercussions. Had the concept of the infinitely small been stifled, scientific advancement would have been stymied; with its victory, a new and dynamic science could emerge and, along with it, social and political freedoms on a scale never before known.

You probably don’t think of the development of calculus as ripe material for a political thriller, but Amir Alexander has given us just that in Infinitesimal.
―Jordan Ellenberg, The Wall Street Journal

Packed with vivid detail and founded on solid scholarship, [Infinitesimal] is both a rich history and a gripping page turner.
―Jennifer Ouellette, The New York Times Book Review

With a sure hand, Mr. Alexander links mathematical principles to seminal events in Western cultural history, and has produced a vibrant account of a disputatious era of human thought, propelled in no small part by the smallest part there is.
―Alan Hirshfeld, The Wall Street Journal

Brilliantly documented . . . Alexander shines . . . the story of the infinitesimals is fascinating.
―Owen Gingerich, The American Scholar

Back in the 17th century, the unorthodox idea [of infinitesimals], which dared to suggest the universe was an imperfect place full of mathematical paradoxes, was considered dangerous and even heretical . . . Alexander puts readers in the middle of European intellectuals’ public and widespread battles over the theory, filling the book’s pages with both formulas and juicy character development.
―Bill Andrews, Discover

Alexander tells this story of intellectual strife with the high drama and thrilling tension it deserves, weaving a history of mathematics through the social and religious upheavals that marked much of the era . . .The author navigates even the most abstract mathematical concepts as deftly as he does the layered social history, and the result is a book about math that is actually fun to read. A fast-paced history of the singular idea that shaped a multitude of modern achievements.
―Kirkus Reviews, starred review 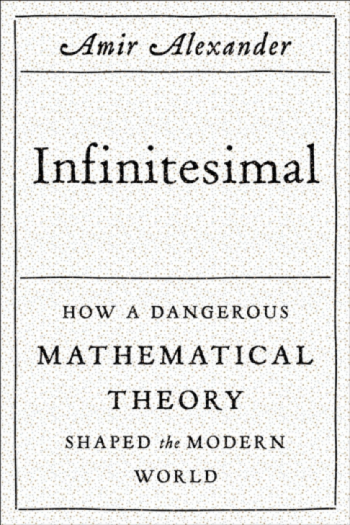