Oligarchy, Democracy, and the Continuing Fight for the Soul of America

Heather Richardson has long been fascinated by the history of the Republican Party. Her last book, To Make Men Free, was hailed as essential reading for understanding American politics after the 2016 election and she is a frequent resource for the media, for the historical context she brings to the current political churning.

In How the South Won the Civil War: Oligarchy, Democracy, and the Continuing Fight for the Soul of America, Heather draws a direct line between the ideology of modern Movement Conservatives who have battled the consensus that the government’s role is to protect the most vulnerable citizens, and the ideas that led southern slaveholders to attack the American government. In doing so, she turns to the history of the western United States to explain what happened in the aftermath of a war that seemed to have established a permanent commitment to equality of opportunity.

She acknowledges that the conflict between a hierarchical society and one based in equality is a battle that has confronted the country from its founding. Equality’s champions may have won the Civil War, but expansion of the country into the west complicated the Republican Party’s commitment to that principle. As the party shifted its allegiances and western politicians gained control of government, the reigning ideology came to be alarmingly reminiscent of that of the Southern slaveholders.

This narrative notwithstanding, Heather’s optimism prevails in this book. She sees the country at a critical moment, but believes that equality will win out in the end.

Praise for How the South Won the Civil War

Heather Cox Richardson explains Goldwater’s crusade and the trajectory of modern conservatism in her masterful How the South Won the Civil War: Oligarchy, Democracy, and the Continuing Fight for the Soul of America. A timely book, it sheds light on what was perhaps the most important political coalition of the 20th century.
–Randall Stephenson, Washington Post

… the seeds of the Southern strategy were sown in the West 100 years earlier, as detailed in a new book by Boston College historian Heather Cox Richardson, How the South Won the Civil War.
–Bruce Bartlett, The New Republic

How the South Won the Civil War, serves as much as a concluding statement as an entry to a conversation about the present…an impressive and expansive look at the historical roots of our modern world with an emphasis on the role of wealth and political power.
–Ashleigh Lawrence-Sanders, Civil War Monitor

A thought-provoking study of the centuries-spanning battle between oligarchy and equality in America.
—Kirkus 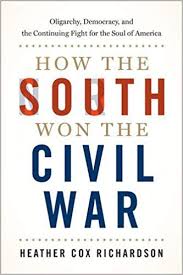