What Physics, Meteorology, and the Natural Sciences Can Teach Us about Economics

“A state of rest” is hardly the way most people would characterize the economy. From bubbles to flash crashes to the housing meltdown, things would seem to be as volatile as this winter’s weather. But not to economists. They trumpet the notion that equilibrium – a state of rest – is the hallmark of the market. This equilibrium model assumes that markets are inherently stable and self-regulating, but the economics based upon this premise can only explain the normal and the expected. One might reasonably conclude that economists are like weather forecasters who deny – all evidence to the contrary – that storms exist.

In Forecast: What Physics, Meteorology, and the Natural Sciences Can Teach Us about Economics, Mark Buchanan – author of The Social Atomand Nexus – overturns equilibrium thinking about the economy and shows that markets aren’t inherently stable but instead closely mimic the weather, with perpetual variations and flash storms and occasional periods of blue sky. Founded on concepts of positive feedback and natural instability from the physical sciences, this is a profound shift in the way we think about economics. One that might turn everything we have learned about economics inside out.

The author’s stimulating deconstruction of contemporary economic theory parallels a treatment of major positive developments in physical sciences and pays due respect to the functions of government and law.
— Kirkus Reviews 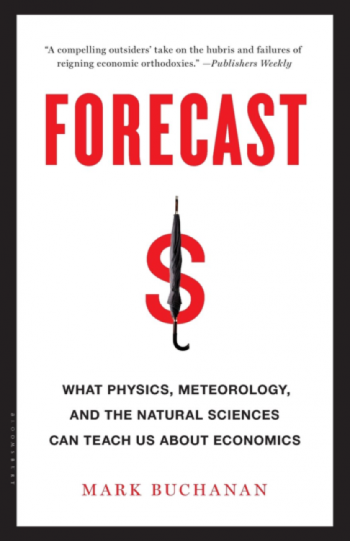