How Wildfire Will Shape Our Future

For two months in the spring of 2016, the world watched as wildfire ravaged the Canadian town of Fort McMurray. Firefighters named the fire “the Beast.” It acted like a mythical animal, alive with destructive energy, and they hoped never to see anything like it again. Yet it’s not a stretch to imagine we will all soon live in a world in which fires like the Beast are commonplace. A glance at international headlines shows a remarkable increase in higher temperatures, stronger winds, and drier lands– a trifecta for igniting wildfires like we’ve rarely seen before.

Our understanding of the role fire plays in healthy forests has come a long way in the past century. Despite this, we are not prepared to deal with an escalation of fire during periods of intense drought and shorter winters, earlier springs, potentially more lightning strikes and hotter summers. There is too much fuel on the ground, too many people and assets to protect, and no plan in place to deal with these challenges.

In Firestorm, journalist Edward Struzik visits scorched earth from Alaska to Maine, and introduces the scientists, firefighters, and resource managers making the case for a radically different approach to managing wildfire in the 21st century. Wildfires can no longer be treated as avoidable events because the risk and dangers are becoming too great and costly. Struzik weaves a heart-pumping narrative of science, economics, politics, and human determination and points to the ways that we, and the wilder inhabitants of the forests around our cities and towns, might yet flourish in an age of growing megafires.

As greater and more destructive fires become the norm, this narrative should be required reading.
—Library Journal

Struzik delivers a powerful message that will appeal to environmentally minded readers and students of climate change.
—Kirkus Reviews

Struzik’s compelling narrative combines personal stories, photographs, history, and interviews with scientists, government officials, and the public. What emerges is a portrait of the intricacies of the forest management practices, settlement patterns, economic motivators, and political pressures that lead up to and influence decisions during these wildfires…Struzik warns readers of the bleak reality that may lie ahead if we continue ‘business as usual,’…[but] does not forfeit hope.
—Science

Kolbert’s fascinating and grim account of the forces eroding biological diversity in The Sixth Extinction.
—Tyee

A new wildlife paradigm is emerging in North America’s boreal forests…Edward Struzik’s deft account interweaves reportage, science and policy to show how fires that are normally key to ecological resilience are growing bigger and faster, thawing permafrost, degrading watersheds and disrupting habitats of species from grizzly bears to fungi.
—Nature

Struzik…cover[s] over a century of scorched earth where science, business, and politics have collided over and over again to produce ever-shifting policies of containment and prevention. Not just a remarkable history, the book also speculates about future where humans might not eradicate megafires, but thrive nonetheless.
—Omnivoracious: The Amazon Book Review

Firestorm reads at times like an exhilarating novel but it is neither flippant nor alarmist…The book is a clear-eyed vision, expertly and compellingly told, of what’s ahead as the climate warms…a fascinating page-turner.
—Edmonton Journal 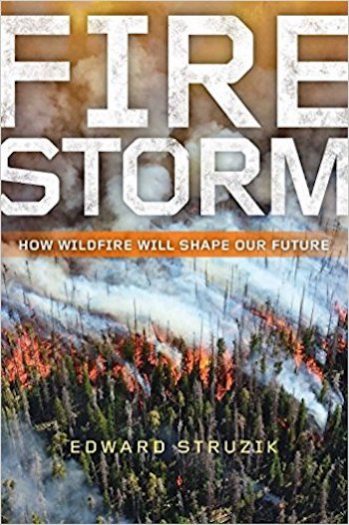