The Hunt for Dark Energy and Dark Matter in the Universe

Dark Energy. Dark Matter. They don’t just sound mysterious, their strangeness is causing long-held notions about the universe to be questioned all over again. Astronomers have long known that the universe is expanding, but they assumed that gravity was slowing down that growth. Instead, it appears that the growth of the universe is accelerating and that something stronger than gravity – dark energy—is at work. Scientists are looking at both the biggest and the smallest objects in the universe in search of a clue to what dark energy and dark matter are and to answer the age-old question of “what is the universe made of?”

In Einstein’s Telescope, Evalyn Gates suggests that there is a tool that may offer a way to answer these questions. Based on Einstein’s General Theory of Relativity, gravitational lensing, or “Einstein’s Telescope,” is allowing scientists to see the unseen and to measure the unmeasurable. These new discoveries are taking us to the brink of the next revolution in scientific thinking—one that may change forever our notions of where the universe came from and where it is going.

Starred Review. As exciting as it is informative.
– Booklist

What stands out in Evalyn Gates’s cogent review of this intriguing topic is the sheer cleverness astronomers have demonstrated in fashioning tools to study the unseeable.
—Marcia Bartusiak, The Washington Post

Gates . . . brings dark matter, dark energy, and even black holes to light . . . with deft humor and grace.
– Neil deGrasse Tyson, author of Death by Black Hole and The Pluto Files 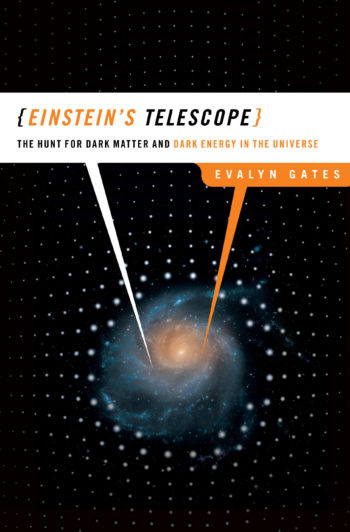