Fatherhood in the Inner City

In 1965, Daniel Patrick Moynihan, then assistant secretary of labor for President Lyndon Johnson, penned the now infamous report, The Negro Family: A Case for National Action. Moynihan claimed that due to the sharp increase in out-of-wedlock childbearing—a condition affecting only a small fraction of white children but one in five African Americans at the time—the black family was nearing what he called “complete breakdown.” Over the next two decades, the rate of unwed childbearing tripled for the nation as a whole, and the prevalence among whites is now higher than it had been for African Americans when Moynihan authored his report.

Into this vacuum of scholarly ignorance and public indignation emerged the compelling image of the “hit and run” father. According to this view, these men are interested in sex but not marriage. When their female conquests come up pregnant, they quickly flee the scene and leave the expectant mother holding the diaper bag.

In Doing the Best I Can Kathryn Edin and Timothy J. Nelson provide a much more nuanced portrait. Rich in descriptive detail on poor fathers who have most of their births outside marriage, and do much of their parenting while not living with their children’s mothers, they suggest that the hit and run image of unwed fatherhood is a caricature that obscures more than it reveals.

Getting the story right is critical for forging more effective social policies.

Praise for Doing the Best I Can

This warm and often moving book cuts through the rampant stereotypes and misconceptions to give us the most insightful treatment yet of fatherhood in the inner city. Nelson and Edin are to be congratulated.
—Bob Herbert, Distinguished Senior Fellow at Demos 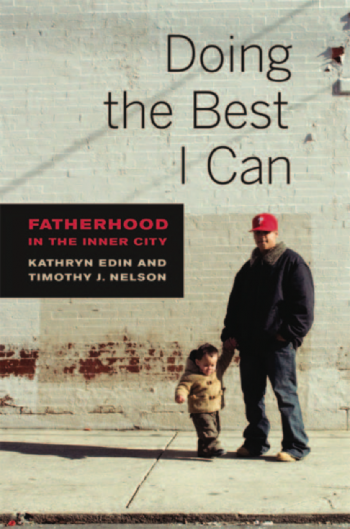