In November 1977 more than thirty-five thousand people came to Houston, Texas. Twenty thousand visitors – mainly women – were there to celebrate the first and only national women’s conference to be sponsored by the federal government, and to endorse an agenda for women’s issues that would guide law and policy for the next decade. Some were politicians, some were activists, and others were celebrities from TV, film, and sports. These well-known Americans were joined by thousands of women of all races, classes, occupations, and ages who poured into the city to take part in an event that would prove to be historic.

Another fifteen thousand came in protest, to prove that the National Women’s Conference and its announced social and political goals were not universally embraced. Organized by a group of conservative activists including Phyllis Schlafly, whose political prowess was only beginning to be recognized, they gathered at the Houston Astrodome. They cheered as speakers urged them to defeat the Equal Rights Amendment and to overturn landmark legislation that had been enacted with the support of Democratic and Republican feminists during a decade of remarkable social change.

Divided We Stand: The Battle Over Women’s Rights and Family Values that Polarized American Politics is historian Marjorie J. Spruill’s narrative of this remarkable moment. It is the story of a clash between women’s rights advocates and social conservatives that would prove to have lasting consequences.

Marjorie Spruill draws the connection between the events that animated supporters and antagonists at the National Women’s Conference and the polarization with which we’ve become all too familiar. By the end of the decade, the Democratic and Republican parties had staked out positions on either side of a divide between “women’s rights” and “family values,” a divide which continues to plague American politics to this day.

Praise for Divided We Stand

Spruill…convincingly traces today’s schisms to events surrounding the National Women’s Conference, a four-day gathering in Houston in November 1977. These divergent narratives from 40 years ago offer many lessons to those hoping to maintain the momentum of the Jan. 21 women’s marches.
–The New York Times Book Review

Marjorie Spruill describes a polarized America that will be recognizable to any consumer of today’s news…A story crucial to understanding American politics over the past 40 years…The question raised by the battle of 1977–who speaks for women?–still bedevils American politics.
– The Wall Street Journal

Fascinating…Divided We Stand evokes two movements, two equal mobilizations, struggling over the role of women in America.
—The Nation

The NWC [National Women’s Conference] featured people and political trends whose significance is all the greater given the election’s outcome. The book details how the conference provoked a bitter debate between feminists and conservative women activists…[Spruill’s] interviews of key participants both illuminate the narrative and preserve first-hand accounts for future scholars.
—Washington Independent Review of Books

Divided We Stand: The Battle Over Women’s Rights and Family Values That Polarized American Politics is an outstanding study of the National Women’s Conference (NWC). Published to coincide with the conference’s fortieth anniversary, Divided We Stand is the first book to fully explore this momentous event .. [Spruill] places readers in strategy sessions and frontline skirmishes, allowing them to feel what it was like to be a part of the buildup to and the aftermath of the NWC.
—The Journal of Southern History

While the shortcomings of the women’s movement in protecting their advances is well-documented in this book, it is the rise of conservative women and how they redirected the Republican Party’s positions that makes the book so interesting. Feminists and supporters of women’s rights will find this difficult to swallow, but this is an important book for them to read.
—New York Journal of Books 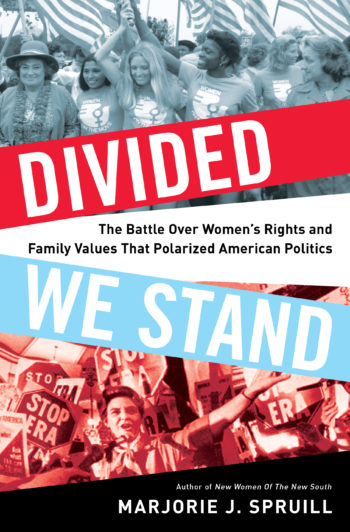