Can We Restore Neighborhoods Without Destroying Them?

When a distressed urban neighborhood gentrifies, all the ratios change: poor to rich; Black and Brown to white; unskilled to professional; uninsured to insured; food insecure to food secure. Vacant lots become condos, junkyards become parks, and trendy new restaurants open. But the people who originally lived there—enduring miserable conditions for years and working hard to change them—are gradually driven out. For them, the neighborhood hasn’t been restored so much as destroyed.

Focusing on the Olneyville section of Providence, Rhode Island, Thanks for Everything (Now Get Out) asks, Can we rebuild such neighborhoods without setting the stage for their destruction? Is failure the inevitable cost of success? The answer is based on years of interviews and on-the-ground observation. Joseph Margulies argues for innovative and practical strategies of self‑government and advocates for a new form of organization—the “neighborhood trust”—to give low-income residents ownership and control of assets to allow them to chart their own future.

Praise for Thanks For Everything (now get out)

With piercing insights, Joe Margulies compellingly traces the history of one neighborhood in Providence, Rhode Island, a stand-in for distressed neighborhoods around the country. This utterly original book takes on many of our assumptions about race, poverty, and gentrification—and tackles the toughest question of all: In restoring these places, do we set them up for destruction?
—Alex Kotlowitz, author of An American Summer and There Are No Children Here 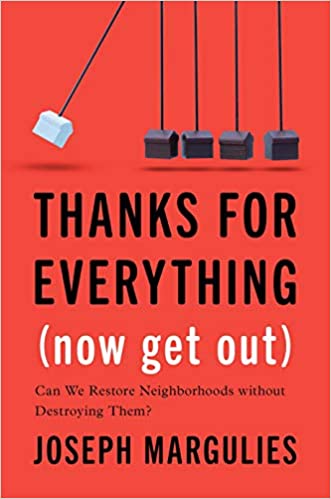