Euler's Formula and the Beauty of Mathematics

More than 250 years ago, Leonhard Euler, the Mozart of mathematics, uncovered a set of astounding hidden connections in the form of an equation with just five numbers. Written simply as eiπ + 1 = 0, it now is called Euler’s Identity, and it has long been regarded by many mathematicians as their field’s most singular result, one that is simple to look at and yet captures math’s most important constants. Richard Feynman, in his lectures, called it “the most remarkable formula in mathematics.”

A Most Elegant Equation: Euler’s Formula and the Beauty of Mathematics conveys math’s elegance and profundity via a gentle, unhurried account of the history, meaning, and derivation of this single deep equation.  In it, David Stipp ranges across the history of mathematics while guiding readers on a tour of Euler’s stunning discovery, offering even those who have long shied away from math a chance to experience its beauty, depth and surprise.

David  is an award-winning science writer whose work has appeared in Scientific American, Fortune, the New York Times, the Wall Street Journal and other publications. He is the author of The Youth Pill: Scientists at the Brink of an Anti-Aging Revolution published by Portfolio.

Praise for A Most Elegant Equation

Stipp gives his reader a good shot at getting hold of something beautiful.
—The Weekly Standard

“If you are an intelligent reader–even one with a weak mathematical background… you could learn a lot from this book, and enjoy the experience.
—Mathematical Association of America

A Most Elegant Equation is a smart, incisive account of Euler’s famous equation. It beautifully and seamlessly straddles the line between the salient ideas of the equation’s proof and its historical, scientific, and philosophical significance.
—John Allen Paulos, author of Innumeracy and A Numerate Life 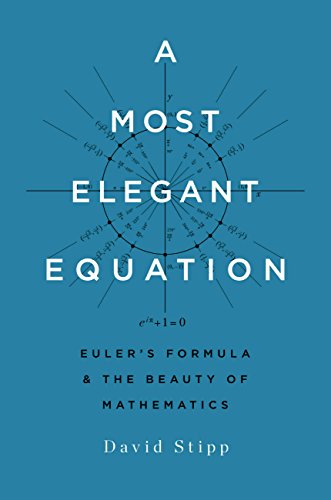