The Surprising Truth about Compassionate Conservatism

We all know we should give to charity, but who really does? Approximately three quarters of Americans give their time and money to various charities, churches, and causes, the other quarter of the population does not. Why has America split into two nations: givers and non-givers?

Arthur Brooks, a top scholar of economics and public policy, has spent years researching this trend, and even he was surprised by what he found. In Who Really Cares?, he demonstrates that conservatives really are compassionate—far more compassionate than their liberal foes. Strong families, church attendance, earned income (rather than state-subsidized income), and the belief that individuals, not government, offer the best solution to social ills—all are factors that determine how likely one is to give.

Charity matters—not just to the giver and the recipient—but to the nation as a whole. It is crucial to our prosperity, happiness, health, and our ability to govern ourselves as a free people. In Who Really Cares?, Arthur Brooks outlines strategies for expanding the ranks of givers, for the good of all Americans. 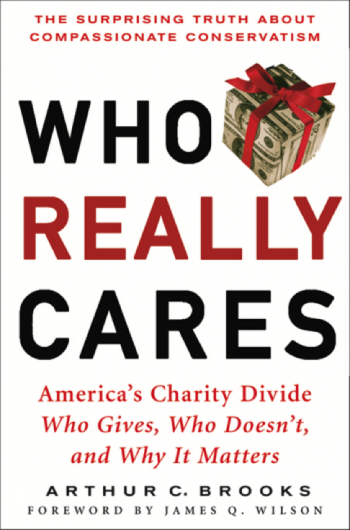