Government as the Ultimate Risk Manager

One of the most important functions of government—risk management—is one of the least well understood. Moving beyond the most familiar public functions—spending, taxation, and regulation—When All Else Fails spotlights the government’s pivotal role as a risk manager. It reveals, as never before, the nature and extent of this governmental function, which touches almost every aspect of economic life.

In policies as diverse as limited liability, deposit insurance, Social Security, and federal disaster relief, American lawmakers have managed a wide array of private-sector risks, transforming both the government and countless private actors into insurers of last resort. Drawing on history and economic theory, David Moss investigates these risk-management policies, focusing in particular on the original logic of their enactment. The nation’s lawmakers, he finds, have long believed that pervasive imperfections in private markets for risk necessitate a substantial government role. It remains puzzling, though, why such a large number of the resulting policies have proven so popular in a country famous for its anti-statism. Moss suggests that the answer may lie in the nature of the policies themselves, since publicly mandated risk shifting often requires little in the way of invasive bureaucracy. Well suited to a society suspicious of government activism, public risk management has emerged as a critical form of government intervention in the United States.

Praise for When All Else Fails

David Moss…offers a novel perspective on the extraordinary expansion of government. Where once it confined its remit to the bare essentials of defence, internal security and the enforcement of private-property rights, today’s leviathan spreads into every corner of national life, not just by taxing and spending but also by regulating. Much of the growth, Mr. Moss argues, has come from the state’s unique ability to reallocate risk. Government has expanded its reach because it is the ultimate risk manager…. [An] enlightening book.
—The Economist

Moss examines public policy attempts to either spread or shift the burden of risk from a favored group to others by tracing major US social reform movements…. Given the antistatist nature of American democracy, Moss concludes that government’s redistribution of various risks of its favored citizens has served as a substitute for a more significant redistribution of income. Readers interested in the historical roots of American institutions should find this book a treat.
—R. Kelly, Choice

This is a useful and worthwhile book for anybody interested in the evolution of U.S. government risk management or effective policy design. Professor David Moss argues that the U.S. government has since its inception acted as a manager of risk due to its unique ability to enforce action…. Moss deserves congratulations for showing government policy to be more than self-interested rent seeking and for revealing the reasoning behind government risk management—a recommended book.
—Thomas Kemp, Journal of Economic Issues

This is an important book… Moss combines the insights of economics, history, law, and political science to create a new framework for understanding government… His risk management framework cuts through the liberal/conservative debate in U.S. politics because it demonstrates continuities where others have seen only divides.
—Tom Baker, University of Connecticut

David Moss’s book makes an innovative and persuasive contribution to the history of regulation and social policy in the United States…. This is a major work in the field.
—John Coatsworth, Harvard University

This is an important book that should reshape public debate on the relationship between governments and private markets… It should penetrate Washington as well as Cambridge, should spur debate in Regulation as well as the Journal of Political Economy, and should be read by George W. Bush as well as students in courses on political economy and on business government relations…. The time is certainly right.
—Kenneth A. Oye, Massachusetts Institute of Technology

When All Else Fails very effectively explores the search for protection from the risks of modern life… We need more books like this that seamlessly combine economics and political analysis to help us understand the history of important areas of public policy.
—Harvey M. Sapolsky, Massachusetts Institute of Technology

I am very enthusiastic about this book since I have learned so much from it about the origins of our economic institutions and about the fundamental principles by which our government creates value for society. It is a profoundly enlightening book.
—Robert J. Shiller, author of Irrational Exuberance

When All Else Fails is a dazzling and bold new intellectual history of the relation between government and the economy in the United States… Like John Kenneth Galbraith, Moss has a gift for making economics and finance come alive…. He could well turn out to be one of our leading public intellectuals in addition to being a first-rate scholar.
—Deborah Stone, Brandeis University 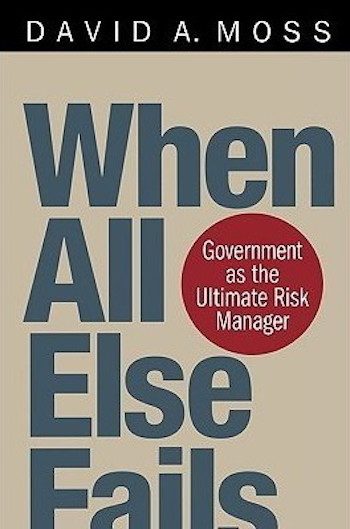