An Uncommon History of 1776

The year 1776 conjures up a host of familiar images – so resonant and so laden with meaning that it comes almost as a surprise that they all took place in an area that was a very small slice of what would become the country. But the rest of North America was far from quiet at the time.

West of the Revolution: An Uncommon History of 1776 is a continental history of that remarkable year. By introducing two other revolutions – one geographic and the other demographic that occurred simultaneously with the War for Independence – into the narrative of early American history, Claudio Saunt makes the case for understanding our origins in a very different way.

As the American Revolution was playing out, European settlers were upending economic, cultural, political, and ecological patterns across the continent. As they established their first colonies along the west coast and as their rapid growth in numbers made native peoples a minority in North America, they introduced unpredictable and unstoppable changes whose effects would be felt far and wide, and for centuries to come.

Claudio Saunt’s narrative of these other revolutions – less iconic, more diffuse and less manageable than the more familiar one – resonates powerfully today. By putting the more familiar events of the Revolution in this context, we come away with a far richer rendering of our history.

Praise for West of the Revolution

Saunt ably juggles myriad events—the Hudson Bay Company causing the near extinction of many species of animal, the Lakotas’ discovery of the fertile Black Hills—throughout his compelling narrative.

Claudio Saunt offers a dramatic and compelling new take on the North America of 1776. With careful research and in evocative writing, Saunt brilliantly recovers the cultural diversity and many possibilities of a continent dominated by native peoples and coveted by several empires. 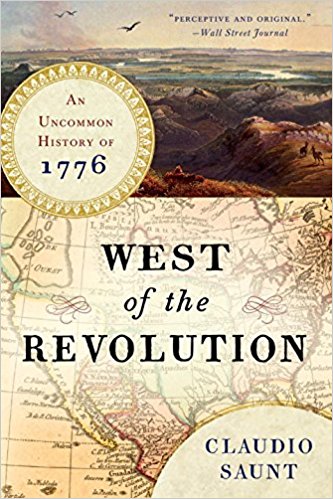