The Blinding of Sgt. Isaac Woodard and the Awakening of President Harry S. Truman and Judge J. Waties Waring

Watch The Blinding of Isaac Woodard, a documentary film based on Unexampled Courage, on The American Experience on PBS

On the day of his discharge from the United States Army, Sgt. Isaac Woodard, a decorated veteran, was beaten and blinded by a small-town police chief in South Carolina. Woodard, like other returning black World War II veterans, had expected that his wartime service would entitle him to respectful treatment and the full benefits of American citizenship once he returned home. But he quickly discovered that little had changed in the South while he was gone. Jim Crow laws remained in place and black disenfranchisement was the rule. On that February day in 1946, Woodard refused to assume the docile and subservient role expected of him. He paid a tragic price.

Although an all-white jury exonerated Chief Shull, Woodard’s case motivated Truman to take action by creating his Commission on Civil Rights, the first national civil rights commission, and to issue his executive order ending segregation in the armed forces. The trial would also move the federal judge who presided over the case. Judge J. Waties Waring was no civil rights pioneer, but the Shull trial galvanized the eighth-generation Charlestonian to commit the balance of his career to using the law to advance the cause of civil rights.

Waring’s dissent in the case of Briggs v Elliott, in which he called school segregation unconstitutional, was the first of the four cases that would be consolidated as Brown v Board of Education. And the words in Waring’s dissent would form the legal basis of the Supreme Court’s landmark decision.

While it is largely forgotten today, Julian Bond would call the blinding of Isaac Woodard “the spark that ignited the modern civil rights movement.” And in Unexampled Courage, Richard Gergel, who is himself a federal judge and presides in the courtroom where Judge Waring once served, captures a piece of history that we need to remember.

Remarkable . . . riveting . . . a revealing window into both the hideous racial violence and humiliation of segregation . . . and the heroic origin of the legal crusade to destroy Jim Crow . . . an engrossing history . . . The great value of Unexampled Courage is that it might garner a broad audience for the kinds of heroism involved in this history of litigation.
― David W. Blight, The New York Times Book Review

Gergel’s hallmark is an emphasis on how people at every level contribute to the making of history…He makes that point memorably in Unexampled Courage. Hopefully it will nurture the ground from which will arise more effective efforts in our own time to confront the ongoing menace of racially motivated police violence.
― Randall Kennedy, The American Prospect

Packed with overlooked history . . . Gergel recounts [the story of Sergeant Woodward] with compelling prose, revealing how a single injustice led to some of the nation’s most important civil rights victories.
– Eric Deggans, NPR

In this enlightening study, judge and historian Gergel illuminates the far-reaching effects of an individual act of cruelty . . . This is an important work on the prehistory of the civil rights struggle and an insightful account of how a single incident can inspire massive social and political changes.
― Publishers Weekly, Starred Review

Gergel is both an astute researcher and an engaging writer, bringing this significant story to vivid life … Civil rights history at its most compelling.
– Kirkus Reviews, Starred Review

Gergel presents a compelling account of a case that helped point the way for broader, more intense, and more effective efforts in the civil rights movement.
― Booklist 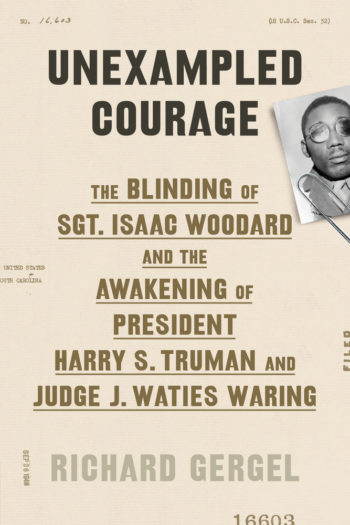