How Algorithms are Rewriting the Rules of Work

There has been a lot of ink spilled on the question of whether Uber is the future of work. But little of it has looked at the power that accrues to the rideshare company as a result of the information that it gathers about both its drivers and its riders. Like other sharing economy firms, Uber lives by its algorithms, but those algorithms are largely hidden from the drivers who depend on Uber for their livelihoods and from the users who have bought into the idea that its technology is neutral.

Uber has done a masterful job of convincing riders and drivers that its model is a positive solution to the changes that technology has wrought. Its narrative celebrates the sharing economy as a pathway to autonomy and prosperity that is open to all. But by blurring the line between workers and consumers and by using its technology to manage both drivers and riders as participants on its digital platform, Uber frequently misleads, coerces, and otherwise disadvantages both.

Alex Rosenblat has devoted hundreds of hours to driving with Uber in order to understand the nature of that work. What she reveals in Uberland  will change the way we think about the technology platforms that are redefining the nature of work and the nature of employment.

In this thoughtful critique of the sharing economy, Alex suggests that there are ways in which government and the law can intervene to shape the way in which Uber manages its algorithms. While there will always be a struggle over power in the context of working for Uber or any digital platform business, making the algorithms more fair and the transactions more accountable can make for a more equitable and sustainable economy.

Functions as an examination of both how Uber’s algorithms are changing the way companies operate and exert control over their workers and how those workers are experiencing these changes.
—Slate

A timely look at the tensions between technology and the future of employment, and how ambitious startups might be changing the way we see and value work
—Mother Jones 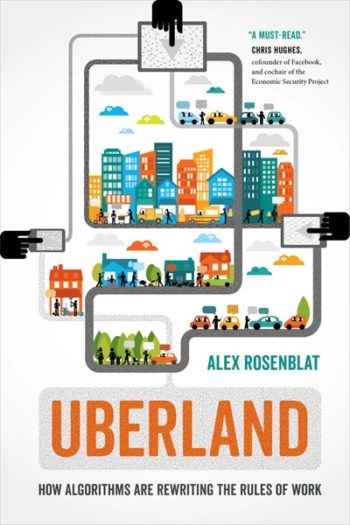