Mexico, the United States, and the Road Ahead

The picture of Mexico we most often see today, is the one of rampant drug violence and illegal immigration. While, unfortunately, there is truth to those images, they are far from the complete story. And the instinctive response – walling ourselves off – is counterproductive and even harmful to our national interests.

Overlooked in today’s bloody headlines is Mexico’s fundamental transformation. In over three short decades it has gone from a poor to a middle class nation, a closed to an open economy, an authoritarian to a vibrant (if at times messy) democracy, and a local to an increasingly binational society. But while things are much better than portrayed, Mexico does face a true security challenge. It stands at a crossroads. It can follow a path toward a top ten economy, an open democracy, and a leading world voice, or one that spirals down into drug-fueled corruption and violence. Today’s choices will define not only Mexico’s future, but also that of the United States. Perhaps no other nation is as indelibly intertwined with our economy, society, and daily lives. What happens in Mexico will affect the United States for decades to come.

Two Nations Indivisible tells the story of the making of modern Mexico, and what it means for the United States. Recounting the economic, political, social, and security changes of the last thirty years, it provides a roadmap for the greatest overlooked foreign policy challenge of our time -relations with our southern neighbor. For the good of both countries, it argues against walling the United States off from its neighbor; and instead for investing finally in a true partnership.

A good political and economic history of modern Mexico, the book will be of interest to those seeking a deeper understanding of the country..

Shannon O’Neil’s new book Two Nations Indivisible insightfully analyzes and explains the different and at times paradoxical aspects of modern Mexico. Throughout the book, O’Neil livens the narrative with well-told anecdotes drawn from her own experiences in Mexico City and other parts of the country. She distills more than two decades of research into straightforward prose and also shares the stories of the friends and acquaintances she met through the years. 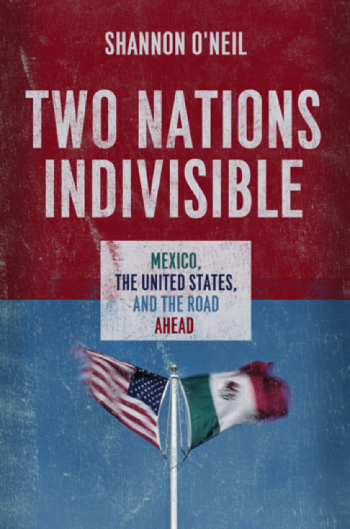