When Thomas Paine’s name is mentioned, you might think “pamphleteer,” “radical,” “author,” but probably not “bridge builder,” either literally or figuratively. Yet Paine spent much of the last several decades of his life dedicated to designing, promoting, and building an iron bridge that could span rivers without impeding the flow of waterborne traffic below.

At first this seems an unlikely endeavor for a man of words. But the quest for a bridge that would enable the easier transit of people and goods would, to Paine’s mind, free individuals to better themselves, make for a more civil society, and allow government to act in the interests of that society. Such an invention would further the cause of democracy and creativity – causes to which Paine had devoted himself throughout his lifetime and with his writing.

Paine would travel to France and to England in the process of generating interest and support for his invention and he would enlist friends and supporters in the cause – from Benjamin Franklin and Robert Morris to Edmund Burke and the British patron of science, Sir Joseph Banks. Yet Paine’s bridge, like many of his causes, would not be realized in his lifetime. It would be thirty more
years before an iron bridge was built in the US.

In Tom Paine’s Iron Bridge, Edward Gray offers a new perspective on Paine, through the story of his struggle to turn his revolutionary ideas into ordinary reality. Determined to prove that good ideas would prevail, Paine embodied the belief that an open, democratic sensibility was central to the fashioning of both technological innovations and entirely new notions of government. The story of his quest to build a bridge is both richly dramatic and surprisingly modern.

Edward G. Gray’s fascinating and important book, Tom Paine’s Iron Bridge, reveals that Paine was as committed to building a new order as he was to tearing down the old. Mr. Gray, a history professor at Florida State, gives us Paine as we have never seen him before: designing and advertising technological innovations and encouraging private-public investment in the new nation.
— Kathleen DuVal, The Wall Street Journal

If you thought nothing more could be said of Thomas Paine, you were wrong. Ed Gray’s new book is a game-changer. An iron bridge, a unified economy, a legislative heart of the union: Ed Gray demonstrates as never before Paine’s greater vision.
—Ray Raphael, author of A People’s History of the American Revolution

Americans want to see the nation’s adolescence as a time of infinite possibility, and so did Thomas Paine. But Edward Gray’s engrossing account of Paine’s lifelong fixation on bridge-building reminds us that a host of human vices, from religious bigotry to political and sectional bias, were always there, waiting as patiently as the wolf at the door.
—Woody Holton, author of Abigail Adams 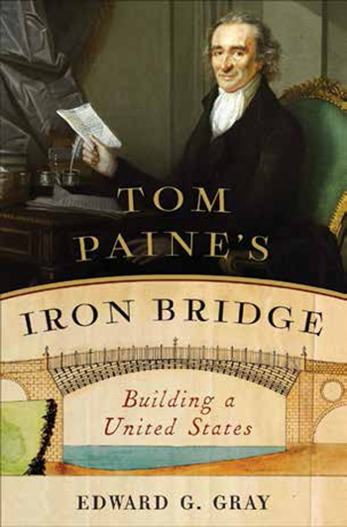