Firestone's Scramble for Land and Power in Liberia

In the 1920s, after the American industrialists Thomas Edison, Henry Ford, and Harvey Firestone, successfully lobbied the US Congress to make $500,000 available to develop an American rubber supply, they each set off in search of a viable source. Ford failed spectacularly in Brazil and Edison’s attempt to find a domestic source was unsuccessful. But Firestone, having set his sights on the former American colony of Liberia, would prove to have been prescient. His Firestone Plantation Company, established in 1926, would become a major supplier of rubber, reaping vast riches for the firm.

Firestone secured a 99-year lease from the government of Liberia, having pitched Firestone Plantation Company as a source of development opportunity for the citizens of Liberia. The country, founded by American abolitionists and slaveholders who saw it as a means of reducing racial strife, had long and complicated ties to the US. Firestone would rely on the support of the African American community, which early on championed the benefits that Firestone promised for African-Americans and Liberians alike. The plantation economy that Firestone established in Liberia would do little to deliver on those promises. Instead, it left the country vulnerable to civil war and then to a terrifying epidemic when the Ebola virus emerged in its capital in 2014.

In Empire of Rubber: Firestone’s Scramble for Land and Power in Liberia, Gregg Mitman looks deeply into the history of Liberia and the role of Firestone and other foreign interests, to bring the tragic story to light. The profits that Firestone reaped came at enormous cost and the company stood by as the seeds were sown for a devastating war and, eventually, an epidemic that needlessly took countless lives, and stigmatized a country and its people.

Praise for Empire of Rubber

A harrowing and richly detailed account of U.S. tire manufacturer Firestone’s exploitation of Liberian workers in the 20th century . . . Mitman marshals a wealth of material to make his case, which encompasses ecological injustice, racial capitalism, and medical racism. The result is a devastating exposé of the tensions between ‘the interests of white capital and the desire for Black self-determination.’
—Publishers Weekly (starred review) 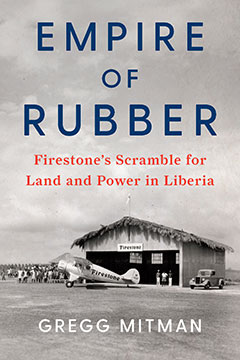