A Short History of the French and Indian Wars

The Companion Volume to the PBS Series

Apart from The Last of the Mohicans, most Americans know little of the French and Indian War—also known as the Seven Years’ War—and yet it remains one of the most fascinating periods in our history.

In The War That Made America, Fred Anderson deftly shows how the expansion of the British colonies into French territory in the 1750s and the ongoing Native American struggle for survival would erupt into seven years of bloodshed and unrest. The struggle would spread from the backwoods of Pennsylvania to the high courts of Europe, eventually overturning the balance of power on two continents and laying the groundwork for the American Revolution.

Beautifully illustrated, richly detailed, and utterly compelling, The War That Made America is the story of how America as we know it today emerged from a series of fractured colonies and warring tribes into a nation ripe for independence—and nobody tells this story better than Fred Anderson.

Praise for The War that Made America

Anderson, a meticulous historian, writes with intelligence and vigor. He has given us a rich, cautionary tale about the unpredictability of war—then no less than today.
—Jay Winik, The New York Times Book Review

[A]n excellent introduction to a conflict that most Americans know little about, and that Winston Churchill called the first worldwide war. Anderson focuses on the North American theater, the outcome of which he claims “transformed the colonists’ world forever” and, in effect, “made America.” He shows how the conflict encouraged colonials “to conceive of themselves as equal partners in the [British] empire,” a concept that Britain did not share and that led inexorably to postwar strife and revolution. In a departure from earlier accounts, Anderson gives unprecedented coverage to the role of Native Americans in the struggle and demonstrates how the war paved the way for the American government’s eventual “destruction or subjugation of native societies.” Like the best popular historians, Anderson combines exhaustive research and an accessible prose style in a volume that should help rescue the French and Indian War from historical obscurity.
—Publishers Weekly

By the 1763 British victory in the Seven Years War (referred to as the French and Indian War in North America), Britain reigned supreme over the eastern half of North America. Yet, a mere 13 years later, a group of lawyers, merchants, and planters would demand, and eventually win, independence for a huge slice of that American empire. Anderson presents a concise, engrossing narrative of this seminal conflict, convincingly illustrating how it led directly to tensions and eventually warfare between the British government and her subjects along the Atlantic coast. Anderson’s explanations of the origins of the struggle are particularly insightful; he also provides a great service by restoring the role of various Native American groups to an essential place in the war. This is an outstanding account of a frequently misunderstood war that will be especially appealing to general readers with an interest in American history.
— Booklist 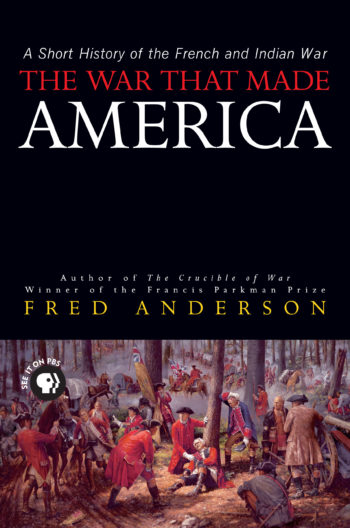