A New Global History From Civil Rights to Economic Inequality

Popular views of the 1970s associate the decade with failure: failure of the military in Vietnam, failure of the presidency in Watergate, failure of the economy in oil crises and stagflation, and ailure of both major political parties in addressing the nation’s serious problems. Pulitzer Prize winner David Kennedy dismissed American society in the 1970s as an “odd blend of political disillusionment and pop-culture daffiness.” The decade remains little examined and much misunderstood.

As historian Thomas Borstelmann sees it, the 1970s was, instead, a period of crucial significance for the making of the contemporary United States. In his new book, The Seventies: A New Global History from Civil Rights to Economic Inequality, he shows how the formal dedication to equality and the embrace of market values that shape modern American society were the product of this turbulent decade. Together, these two powerful social and economic trends produced the newly inclusive but increasingly class-divided individualism that has predominated in American life ever since. And because globalization was well underway during the 1970s, these same two forces of equality and economic liberty would also reshape much of the rest of the world.

The 1970s recasts our entire understanding of a crucial recent decade. The standard image, of an era that simply made way for modern conservativism, obscures the larger story of a nation consolidating an expanding commitment to equal treatment of all its citizens while also embracing free-market policies. The paradoxical combination of inclusive equality with an abiding faith in the wisdom of markets is a better, richer, and more nuanced explanation for the radical individualism of contemporary American society and politics.

Keeping contemporary history timely and accessible, Borstelmann shows the significance of 1970s American politics, culture, and religion on the following decades… The author’s sterling commentary on the rise of the feminist movement, the decline of the Soviet empire, and the new Christian right’s courtship of Capitol Hill sets this book apart from other surveys of the “Me Decade.”
— Publishers Weekly

What sets this book apart . . . is the author’s global approach, making clear that by the 1970s, while other countries may not have seen the US as the preeminent world leader it had been, it was very much a part of a world in which, thanks largely to technological advantages, boundaries of time and space and even culture were collapsing.
—Choice

Thomas Borstelmann provides us with a significant addition to a growing body of literature on the decade. More than an exhaustive survey of American politics, culture, and society in the seventies (a considerable achievement in itself), the study focuses on what Borstelmann brilliantly identifies as the central crux of the decade. . . . Borstelmann has written a thought-provoking, lucid, and at-times brilliant account of American culture, society, and politics in the seventies.
—Natasha Zaretsky, Diplomatic History 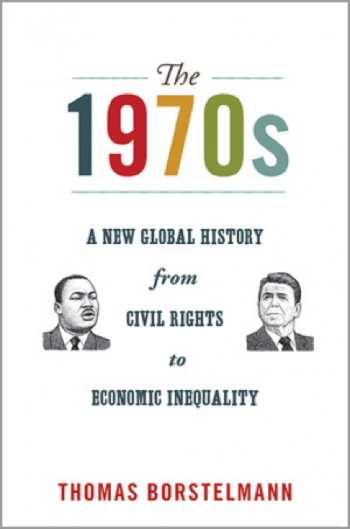