The Life of Sophie Tucker

The “First Lady of Show Business” and the “Last of the Red Hot Mamas,” Sophie Tucker was a star in vaudeville, radio, film, and television. A gutsy, song-belting stage performer, she entertained audiences for sixty years and inspired a host of younger women, including Judy Garland, Carol Channing, and Bette Midler. Tucker was a woman who defied traditional expectations and achieved success on her own terms, becoming the first female president of the American Federation of Actors and winning many other honors usually bestowed on men. Dedicated to social justice, she advocated for African Americans in the entertainment industry and cultivated friendships with leading black activists and performers. Tucker was also one of the most generous philanthropists in show business, raising over four million dollars for the religious and racial causes she held dear.

Drawing from the hundreds of scrapbooks Tucker compiled, Red Hot Mama presents a compelling biography of this larger-than-life performer. Lauren Rebecca Sklaroff tells an engrossing story of how a daughter of Russian Jewish immigrants set her sights on becoming one of the most formidable women in show business and achieved her version of the American dream. More than most of her contemporaries, Tucker understood how to keep her act fresh, to change branding when audiences grew tired and, most importantly, how to connect with her fans, the press, and entertainment moguls. Both deservedly famous and unjustly forgotten today, Tucker stands out as an exemplar of the immigrant experience and a trailblazer for women in the entertainment industry.

Sklaroff assembled an engrossing portrait of this oft-overlooked legend of early Broadway.
Playbill

Sklaroff does Tucker proud; this volume is a winner on every level that should find a well-deserved place in popular culture collections from the Borscht Belt to Tinseltown.
Library Journal, Starred Review

An enjoyable portrait of a remarkable woman.
Theater Jones

Sophie Tucker didn’t influence Madonna or Lady Gaga— she anticipated them. . . . Sklaroff traces Tucker from her beginnings as a singing waitress at her parents’ kosher restaurant through stardom and her genial fade into nostalgia.
Milwaukee Shepherd Express

Bold and sassy, the legendary Sophie Tucker influenced generations of women entertainers. . . Sklaroff sensitively traces the unlikely rise of the daughter of Jewish immigrants, a woman who never fit the svelte body image of popular female entertainers and whose ‘sexual movements and provocative delivery” shocked some viewers.
Kirkus Reviews 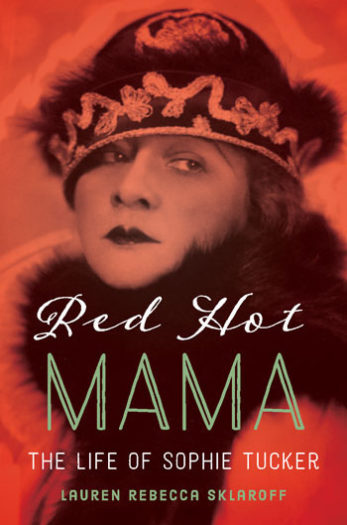