The Wampanoag Indians, Plymouth Colony, and the Troubled History of Thanksgiving

2020 will mark the 400th anniversary of the founding of Plymouth Colony. It will be a chance to celebrate a moment that shaped the history of America, but it is also an opportunity to look beyond the celebration, and to consider the history of Plymouth (not to mention the first Thanksgiving) from a different perspective.

The founding of Plymouth Colony – when seen from the vantage of the Wampanoag Indians – is a story of unrealized possibilities. By broadening the narrative to consider what happened between 1620 and the devastating war between the Wampanoags and the English fifty years later, This Land is Their Land: The Wampanoag Indians, Plymouth Colony, and the Troubled History of Thanksgiving, sheds a very different light on the conventional Thanksgiving story of harmony, triumph and orderly progress toward democracy.

In this timely and provocative book, historian David J. Silverman gives voice to the Wampanoags and in so doing, offers a more nuanced and complicated vision of the founding events than has been told before. It transforms the history into a poignant story, and raises important questions about who we are as a nation.

Praise for This Land is Their Land

David J. Silverman delivers [the story] in astonishing detail . . . His pointed, lucid prose makes his book as deeply engaging as it is sobering. —The Boston Globe

Throughout this well-documented, unique history, Silverman offers a detailed look at . . . the palpable sense of overall mourning after the aftermath of King Philip’s War and the [European] attempt to annihilate (and assimilate) the Wampanoags-and their incredible ability to transcend the dehumanization and prevail . . . an eye-opening, vital reexamination of America’s founding myth. —Kirkus Reviews, starred review

This Land is Their Land is an impassioned plea for a counter-narrative that may revisit and rethink our country’s history. —The Barnstable Patriot

“Silverman’s highly recommended work enlightens as it calls into question persistent myths about the origins of Thanksgiving. —Booklist, starred review

This lucidly written and convincingly argued account of the most “American” of traditions deserves to be read widely.” —Publishers Weekly

… well researched . . . It should be required reading for how not to treat indigenous peoples. —New York Journal of Books

Probably the most important book you need to read before the 400th anniversary of the first Thanksgiving. You know the outlines of the story, but this book is so full of human detail from the perspective of the Wampanoags, you’ll feel like the old histories have inverted the whole thing. It’s like we’ve been looking at a negative image all our lives, and Silverman gives us the real story finally in vivid color. —Joseph Kelly, author of Marooned: Jamestown, Shipwreck, and a New History of America’s Origin 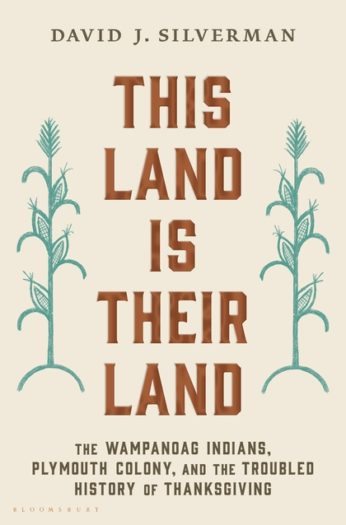 This Land is Their Land