Human Nature and the Need for Social Connection

Almost everyone feels the pangs of loneliness in certain moments. It can be brief and superficial—being the last one chosen for a team on the playground—or acute and severe—suffering the death of a spouse or dear friend. Transient loneliness is so common, in fact, that we simply accept it as a fact of life. Humans are, after all, inherently social beings. When asked to describe the pleasures that contribute most to happiness, a vast majority of people rate love, intimacy, and social affiliation above wealth or fame, even above physical health. Given the importance that social connection plays in the behavior of our species, then, it is all the more troubling that at any given moment, roughly 20 percent of individuals feel sufficiently lonely for it to be a major source of unhappiness in their lives.

In his groundbreaking research on social isolation, John Cacioppo has pried loose the keystone of modern medicine and psychology—the focus on the individual as the unit of inquiry. Using brain scans, blood pressure measurements, assays of immune function, and even changes in DNA replication, his work has revealed the overpowering influence of social context. In this important new book, he and writer William Patick bring loneliness out of the shadow of its cousin depression, and show how fear of social isolation uniquely disrupts our perceptions, behavior, and physiology. Overturning the myth that human nature is a “war of all against all,” Loneliness: Human Nature and the Need for Social Connection shows how social cooperation is humanity’s defining characteristic. With this new understanding, we can begin to break the trap of isolation, both as individuals and as a society.

An absorbing account of our genetically programmed need for each other’s company
—Kirkus, starred review

Loneliness by Cacioppo and Patrick packs a strong message for the lay reader about the importance of social interaction and the feeling that you are part of the social fabric of your society.
—Nature

…a solid scientific look at the physical and emotional impact of loneliness.
—Publishers Weekl 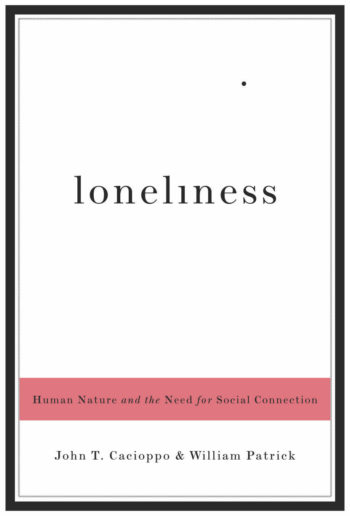