The American Struggle to Understand Foreigners

At a time when fear of the “other” is being consistently stoked, it is not only timely, but important to look at how Americans have thought about and engaged with foreigners since the founding of the nation and, particularly, since the end of World War II. Across the twentieth century, and most notably over the Cold War years, the United States increasingly interacted with people from foreign lands–both at home and abroad. A look at attitudes toward them offers one path toward greater understanding of the history of the United States and its relationship to the rest of the modern world.

In Just Like Us: The American Struggle to Understand Foreigners, Tim Borstelmann explores this history and considers how Americans have come to understand their own American identity, and what the implications are of that understanding. Our ambivalence is evident from the earliest European colonial settlements in North America to contemporary U.S. cultural and political life. From concerns about race and religion, and the so-called American way of life to exclusion and incorporation of immigrants, competition with Communism, Americans abroad, and U.S. expansion into Asia, we have struggled with the question of who could be considered fully American, in legal terms and also in terms of politics and popular culture.

We do live in a radically more inclusive public society, current threats notwithstanding. And it stemmed in large part from the imperatives of our foreign relations. While we have worried, repeatedly, about losing who we are to outside threats, the absorptive, acquisitive individualism of American culture has turned out to be the force that would challenge traditions around the world.

This is one of those books that sticks with you. Borstelmann asks a big question―about U.S. attitudes toward foreigners―and has an important argument to make. What is more, Just Like Us sparkles with telling details and unexpected connections. It is, plainly put, masterful.
— Daniel Immerwahr, author of How to Hide an Empire: A History of the Greater United States 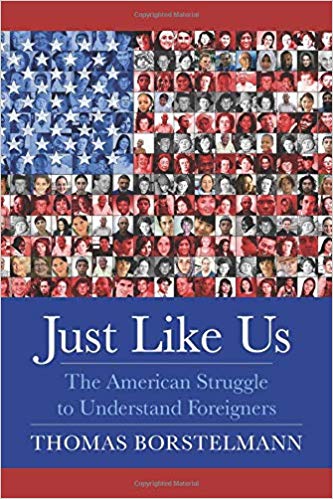