Peter Williamson had a fantastic tale to tell upon his return to Aberdeen, Scotland in 1758. He would publish, and perform, his story of being kidnapped as a boy in Aberdeen, transported across the Atlantic and sold into indenture in Philadelphia, then freed only to have his home destroyed in a raid at the outset of the Seven Years’ War and to be held captive for several months among the Delaware Indians. While it was never clear how much of the saga was true, it was riveting. It would end with Williamson escaping his captors and enlisting in the British Army, only to be taken as a prisoner of war, confined in Quebec, and then ultimately returned to England, and eventually his home town.

Though this is the story of a single individual caught in the swirl of the 18th century British empire, Williamson’s life in America and Scotland offers a look at Britain’s imperial expansion, from a perspective seldom found in other sources. Views of the British Empire in the eighteenth century tended to come from members of the elite classes, while in Williamson’s story it is possible to see the empire from the perspective of those whose service made that empire possible.

In Indian Captive, Indian King: Peter Williamson in America and Britain, 1730-1799, Timothy Shannon unravels Williamson’s story and in so doing, provides insight into how people living on the margins of Britain’s eighteenth-century empire understood and took advantage of their place within it.

This is one of those rare books that will be enjoyed by and serve a variety of readers, including those interested in the British Empire and Atlantic world history.
— Choice

… a remarkable book about an even more remarkable Scotsman … a work of literary detection as exciting and absorbing as any thriller.
— Scottish Review 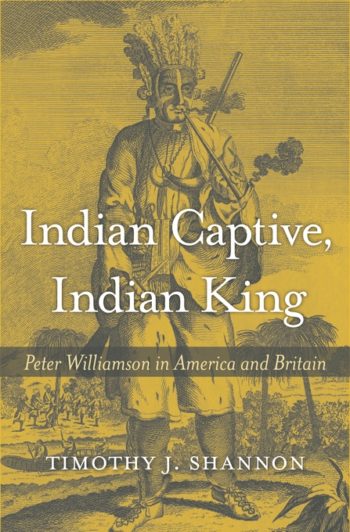