Books like Richard Florida’s The Rise of the Creative Class celebrate the wave of highly productive and creative workers moving to the cities for the assets of arts, culture, diversity and tolerance that they offer. Good jobs await them there. But what happens to the people who are left behind?

That’s the question that sociologists Maria Kefalas and Patrick J. Carr set out to answer in their new book, Hollowing Out the Middle: Why America’s Small Towns are Dying and What Can be Done to Save Them. In order to understand the cost of the so-called “rural brain drain” they spent 18 months living in a small town in Iowa, a state that typifies the troubles of small towns across the American heartland.

They discovered that in spite of being hit hard by the loss of talented young people, these small towns put enormous resources and energy into encouraging them to go. Motivated by the best of intentions, they watch those who are most likely to succeed leave to make their fortunes elsewhere. But while bemoaning the fact that young people are their most valuable export, they invest little to nothing in the young people who choose to stay behind. And it is those young people who are their best chance for a future.

Talented people have always left small towns for bigger cities and brighter opportunities. But at the dawn of the twenty-first century the loss of educated young adults could spell the end of small-town America. Maria Kefalas and Patrick Carr suggest that there are signs of hope for the future of the rural town, but that it is a future that will look very different from the present.

Praise for Hollowing Out the Middle

Deft and detailed case studies bring the population to life. . . . The authors alert readers to this major change with clarity and compassion.”
—Publishers Weekly, starred review

A worthy contribution to a conversation we desperately need to have.
—Bill Kauffman, Wall Street Journal 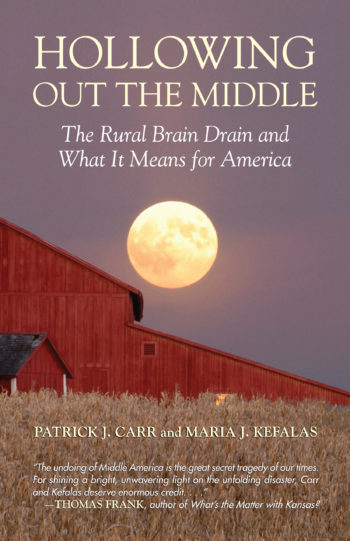