Who are the happiest Americans?

In this provocative new book, Arthur C. Brooks explodes the myths about happiness in America. As he did in Who Really Cares: The Surprising Truth About Compassionate Conservatism, Brooks looks at vast amounts of evidence and empirical research to uncover the truth about who is happy in America, who is not, and – most importantly – why.

He finds that there is a real “happiness gap” in America today – and it lies disconcertingly close to America’s cultural and political fault lines. A great divide between happy and the unhappy America, Brooks shows, is largely due to differences in social and cultural values. The values that bring happiness are faith, charity, hard work, optimism, and individual liberty. Secularism, excessive reliance on the state to solve problems, and an addiction to security all promote unhappiness.

Happiness matters – and Gross National Happiness offers surprising and provocative conclusions about how to find it, and enjoy it. 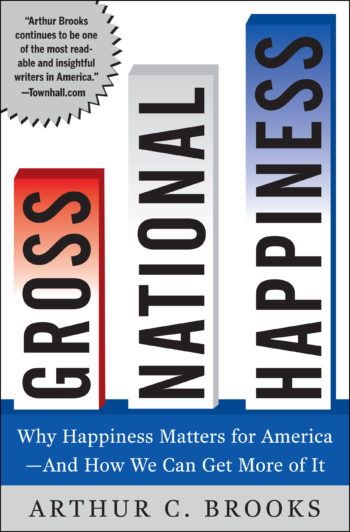