The Miracle of Religion in Modern Manhattan

In July 1957, the fifth year of the Eisenhower presidency, Billy Graham began a revival in Manhattan, America’s “Sodom on the Subway” in Graham’s devastating characterization. But as Jon Butler reveals in God in Gotham, the surprise that actually made Billy Graham’s 1957 New York Crusade success possible was a half century of extraordinary transformation that had long ago turned Manhattan into a sacred city.

God in Gotham explores how, between the 1870s and 1950s, religion defied all expectations about its urban demise. In New York religion resisted the problems thrust up by immigration, urbanization, industrialism, technology, and secularism, and instead responded to these forces with exceptional success. The result was that religion emerged a powerful force, not an impotent shell, a force that would, for better or worse, drive much in twentieth-century American history long after public and private religion had expired at the doorsteps of Europe’s cathedrals.

Praise for God in Gotham 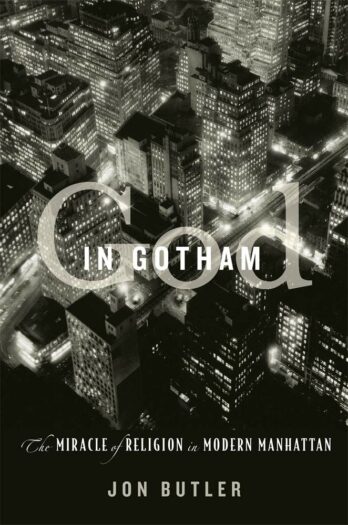