A Scientist's Journey to Seeing in Three Dimensions

What we know about the brain’s ability to learn and adapt is changing fast. Neuroscientists have shelved the long-held idea that the brain is malleable only in infancy, and that once we reach adulthood we lose the ability to make new connections. In its place is the notion of neural plasticity, the reality of a brain that can change itself.

When she was close to fifty, Susan Barry, a professor of neuroscience at Mount Holyoke College, taught herself to see the world in a new way. Never having developed binocular vision as an infant, she had been told that the ability to see in three dimensions was something that was permanently out of reach. Sue, like many others with similar visual constraints, learned to make accommodations for her lack of depth perception, and accepted the limitations that she couldn’t otherwise work around.

That is, until her late forties when, frustrated by yet another doctor dismissing her concerns about her vision as unimportant, she sought out a new approach. And with the assistance of a professional trained in developmental optometry, Sue retrained her brain and defied conventional wisdom by developing binocular vision after decades without it. Her story, as told in Fixing My Gaze: A Scientist’s Journey to Seeing in Three Dimensions, is a remarkable one, both as a stunning example of our ability to form new neural connections and to learn to do things differently, and as a celebration of the mechanisms of sight and the pleasures of the senses. 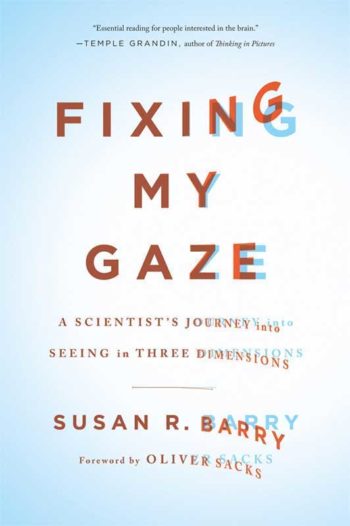