Old Hoss Radbourn, Barehanded Baseball, and the Greatest Season a Pitcher Ever Had

It’s 1884, and America is obsessing over one of the closest and dirtiest presidential races in history. A high-profile tussle in the mud, it seems well suited to American tastes. Even the race for the nation’s highest office has become vulgar and sensational, as the public clamors for trashy stories and celebrity exposes generated by cheap, popular newspapers.

On the ball fields of America, another sensational story is unfolding. A veteran star for the Providence Grays is doing something incredible. Functioning as a virtual one-man pitching staff, working day after day and winning game after game, he is moving his team toward a National League pennant no one thought it could win. His name is Charlie Radbourn, and those who watch him work, calmly and effectively, game after game, come to compare him with the strong, plodding workhorses that can be found on the streets of every city, enduring the heat and cold with patience, loyally lugging their cruel burdens unto death. His contemporaries call him “Old Hoss.” Tied to Providence by baseball’s reserve clause, Radbourn has struck a deal: If he can win the pennant, pitching alone for he bulk of the season, the club will grant him the freedom he so desperately wants.

In 1916, reporters asked 10 big-league managers, “men paid big salaries for their baseball judgment,” to name the greatest feat in baseball history. Six of the ten—including Hall of Famers John McGraw and Connie Mack—gave the laurel to Radbourn’s immortal performance in 1884.

Fifty-nine in ’84 is a classic American tale of grace, grit, passion and humor and the first complete account of Charles Radbourn’s immortal 1884 season, the greatest pitching achievement in baseball history. More than just a chronicle of the season, the story presents a vivid portrait of our National Pastime the way it used to be played, in an America emerging from the horrors of the Civil War and transforming itself into a modern industrial powerhouse. It brings to life an original American hero, the woman he loved, and the unlikely bet he made in order to earn his freedom and her heart. 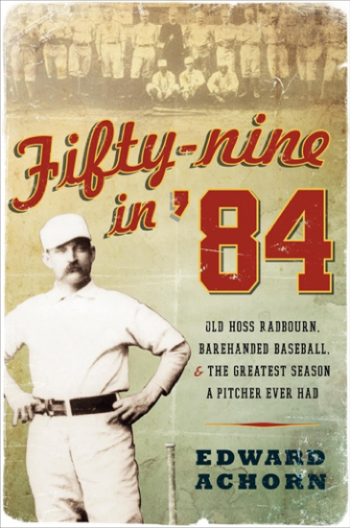