On March 4 th , 1865, with the end of the Civil War in sight, Abraham Lincoln was sworn in to his second term as President of the United States. His inaugural address, now inscribed in the Lincoln Memorial, is one of our most cherished texts. Millions memorize it in school, read it at the Memorial, and turn to its many eloquent phrases for inspiration.

Much has been written about the speech but we know far less about how Lincoln came to write it. In Every Drop of Blood: The Momentous Second Inauguration of Abraham Lincoln, Edward Achorn takes us through the conception, delivery, and legacy of this eloquent, but unexpected, speech by engaging with the ideas, the times, and the passions that stirred Lincoln and those around him.

Ed’s books have been hailed for their ability to evoke time and place, and in this new book he paints a riveting portrait of the inauguration, revealing aspects of the day that have long been forgotten. As Lincoln prepared to address the nation, he was aware that he had only barely been reelected and that the Republican Party was vastly changed since it swept him to power four years earlier. Even among his closest advisors were those who doubted his ability and who schemed to take his place. Sworn opponents, like John Wilkes Booth, stalked him.

Lincoln himself had been transformed by the devastating war as well as by his own personal tragedies. Observers noted his drawn and melancholy appearance. But he approached his inaugural address fully recognizing the power of his words to shape the nation.

Every Drop of Blood plunges us into a wartime Washington of fierce power struggles and violent emotions. By understanding more about this remarkable moment in history, we can better appreciate what Lincoln’s inaugural speech meant to the country then, and why it continues to move us today.

In elegant, episodic detail, Mr. Achorn captures both the immediate experiences of those who attended the inaugural and the recent memories that colored everything they saw and felt, heard and said.
—Wall Street Journal

A fascinating account of an address which entered the national consciousness . . . Achorn has done Lincoln justice, distilling the essence of the speech in a reflection Lincoln would have understood.
—John S. Gardner, Guardian

Achorn’s rich, polyphonic history covers the sumptuous social events as well as the prisoners of war on the muddy streets and the injured languishing in ill-prepared hospitals.
—National Book Review 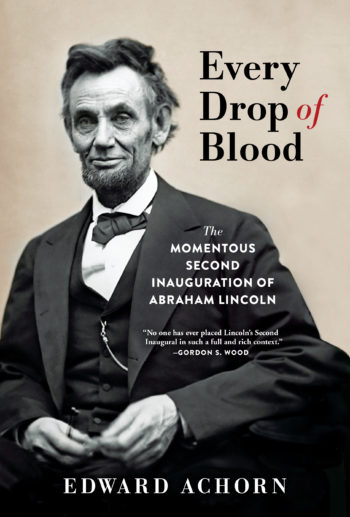